Skip to content
You are here
Home > Featured > Every issue doesn’t need quarrelling: Sonu to Sona

During a summit, Sonu talked about why so many songs are being remixed these days. “Sometimes, I feel like it would be better if I was from Pakistan. At least I would get offers from India,” he joked.

He also said: “If you say, ‘Anu Malik met me this morning’, that’s fine. You accused him without any proof; let’s accept that too. Had he (Anu Malik) wanted to say anything, he could have said a lot. But he did not.

“If I say that you misbehaved with me, you will ask me for proof. But there’s no proof, right? Despite that, people are respecting the accusers, who are tarnishing Anu Malik’s name. But how can you ban him? How can you snatch his bread and butter? How can you torture his family?”

Following Sonu’s comments, Sona, who had accused Anu of sexual misconduct, tweeted on Wednesday that she felt “so let down hearing him talk like this”.

The wife of composer Ram Sampath also wrote: “So much sympathy for a millionaire losing work? So much empathy for his privileged family being ‘tortured’? How about scores of girls and women he tortured? Multiple testimonies not proof enough?” 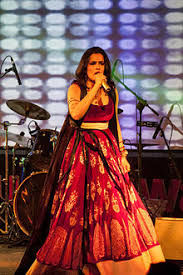 “Not 1 but possibly 100 plus women and men can attest to Anu Malik’s deplorable abusive behaviour. I guess Mr. Sonu Nigam expects all these women/underage girls to – a)strap recording devices b) carry spy cams, other proof gathering devices because they have much to benefit defaming him?”

On Sonu’s Pakistan comment, she said: “Are Arijit Singh, Badshah, Vishal Dadlani from Pakistan though?

“You’ve had your moment under the sun dear. India anoints a new ‘Male Super Star’ every 3/4/5 years without fail. Don’t blame the Pakistani artistes. Also do not mix up art and music with politics and idealogy.”

While “maintaining the decorum”, Sonu responded to her tweets by saying: “The respectable lady vomiting on Twitter, is the wife of someone who I consider very close to me, so although she has forgotten the relationship, I’d like to maintain the decorum.”

(Only someone who is an animal won’t support #MeToo).”

Women with “frankness and courage, shaming their oppressors”, is a refreshing sign of changing times, he pointed out.

“Women have been long oppressed throughout the course of history and it’s high time to end this mindset of treating them like properties or trophies, and now they walk hand-in-hand and shoulder-to-shoulder with men,” Sonu said in a statement to .

He also asked: “it’s okay to accuse someone, but to punish someone? How is that right? Isn’t it the job of the law to punish?” (So aarop lagana sahi hai…par saza dena? Ye kaise sahi hua? Saza dena toh kanoon ka kaam haina?)

He also spoke about lynching.

19th December 2018: On the occasion of Annual Day function of Kandivali’s Nirmala Memorial Foundation College of Commerce & Science, students and the management organised a grand two day event on 18th and 19th December with some amazing and entertaining cultural shows like dance, singing, fashion show etc along with a very special skit on the social issue of LGBT and it grabbed them many applauds.

The glittering show had ‘Dance Plus 3’ fame and India’s #zindarobot aka Amardeep Singh Natt from Dharmesh Sir’s group whose presence electrified the atmosphere at Kora Kendra Ground. He rocked the dance floor by performing on some of his fantastic moves. While interacting with media and being ex-student of the college he said, “I’m glad to come home before resuming my shoot of my upcoming television dance show and taking blessings from my teachers with seeing such a great response, love from you all.

Also the core faculty and the founders of the college shared their thoughts and excitement about the annual day fest and how difficult was it for them to make it grand in every possible way. The founders also shared their vision on how they initiated their flourishing institution even before 2003 with the same vision of Beti Bachao, Beti Padhao – which PM Narendra Modi also follows. Principal of the college Swiddle D’Cunha shares, “We planned for months to make it these huge and we’re proud that we did it with our full efforts and especially with the support of students and management.”

There were also few other young and social media stars as well as Tiktok sensations like Unnati Malharkar and Awez Darbar. Unnati have more than 1.5 million followers on Tiktok and Awez Darbar with 4.5 million. Both the artist’s shared their journey while speaking to the media and were happy to get associated with the college’s yearly annual day festival.

Veteran actor Govind Namdev is at Shirdi, Maharashtra, to celebrate his 63rd birthday on Sunday.