The much-awaited season 12 of IFFD’s India Runway Week saw an array of established and budding designers concentrating on the handloom, sustainable fashion, and social cause too. The three-day of glamour and glitz also saw Neelima Azeem, Vaani Kapoor and Esha Gupta of tinsel town walking the ramp for the designers. 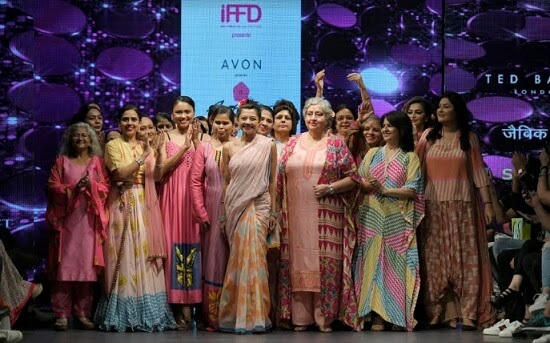 The day 1 started with designer Jaivik Naari’s handmade collection, as a tribute to Gandhi Ji and October month dedicated to ‘Make in India’. The veteran actress Neelima Azeem performed the opening act of classical dance. Other designers who presented their collection on the day 1 included Rasleen Kohli, Jasleen Kaur, Kaveh by Vinay Saurabh, Aastha Kaushik, Priyanka Choudhary and House of Archana, Nikhita Tandon, Saaj by Ankita, Peeli Kothi by Ambica. 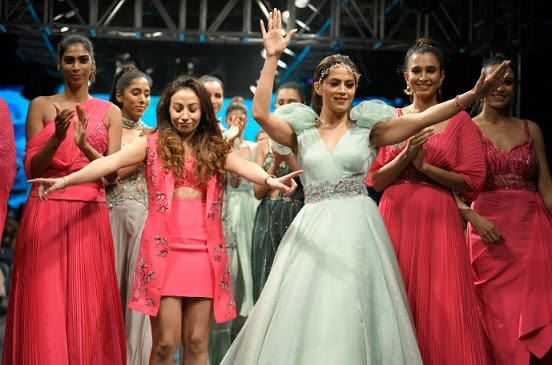 Designer Bani Khurana from NB Couture with her show stopper

After the opening show, Jaivik Naari Brand head said, “It’s an honour for me to dedicate my work to the Father of the Nation. His simplicity is my key as a brand and we feel that is what defines Jaivik Naari’s work as well. We are looking forward to many more moments like this in the future.”

The day also saw upcoming designers Devi Muthukumar, Mona Vora and Tanushavy who presented their creative take for the festive season. Designer Nikhita Tandon’s collection was accessorized with Ted Baker watches and actress Vaani Kapoor walked as the showstopper. The day came to end with two designers showcased, Saaj by Ankita and Peeli Kothi by Ambica.

The day 2 of the fashion event kicked off with the first-ever Ethical Design Challenge where one winner was selected out of 8 young designers from all over India who won the financial support to design her next collection as well as bagging a sponsored show by IFFD. Sahiba Aggarwal who is suffering from cancer won the Ethical Design Challenge 2019.

Later during the day, accessory designer Akassh K Aggarwal showcased a strong accessory line themed “Silent Stories” and a collection of a designer was about expression of LGBTQIA+ Community Existence and the struggle of acceptance.

In a statement, Akassh K Aggarwal said, “I am glad to see the response rate of the audience with the changing world of fashion and I think it’s time we need to generate more avenues for the younger generation to showcase their talent.”

And the evening show Bollywood diva Esha Gupta was the showstopper for Aayana by Siimi, who presented a pre-bridal, bridal wear collection with intricate detailing of Lucknowi thread work. Young Budding Designers lined up late in the evening at 7 pm where Lumegee by Priya Ghosh’s, Ivanaa by Vijaya Krishna, Purnima Gulati, Rituvan Gupta. The day ended with EKAM by Manish Gupta, whose collection was influenced by a lot of bright and happy colors overpowering the grey mood of the past along with the collection of Poonam Dubey.

On the third day, the fashion event in association with Avon celebrated awareness about breast cancer and the entire venue was painted pink lights. While the day time saw a panel discussion to raise awareness about the breast cancer and how frequent self check and help self deduction of breast cancer along with a pink show by AVON, where around 25 breast cancer survivors walked the ramp wearing pink dress’ from ace designer Anupamaa Dayal, the evening saw creations by designer Deepthi Ganesh, Ramink Pahwa and Mystique closet by Jenny Saluja. Miku Kumar & NB Couture did the evening show, just before the finale show. The season’s finale saw Nida Mahmood’s creations on the ramp, which was a delicate mix of handlooms, khadi and mercerized cotton with subtle polka dots and stripes, heady textures and a dash of embroidery teamed with delicate laces. The 100% swadeshi collection was dedicated to the feisty quintessential Indian women who are powerful and bold.