Skip to content
You are here
Home > Featured > Veteran actor Rakesh Bedi celebrates the success of URI, tells us about his scene!

Senior film and television personality Rakesh Bedi, who has been entertaining the audiences since over three decades was recently seen in Aditya Dhar’s latest success directorial URI: The Surgical Strike. However, the actor has a special appearance in the film but plays an important role.

On his role, Rakesh Bedi says, “All actors are in a professional dilemma when offered small parts or cameos in their careers. You don’t know whether the role will fulfill your creative appetite or will become totally nondescript, or enhance the flow of the film. I was too in such a confused state of mind when I was offered a small part in the recently released URI. I almost refused it as I was told that I had only one scene in the film and that the shoot was in Serbia. Then I got a call from direction department of the film. But still I couldn’t make up my mind. Finally, director Aditya Dhar called me and said that it’s his first film and he had me in his mind since the inception of the script. He also told that its only one scene but very crucial as this character is from ISI and is a mole. He passes on the information to the Indian Army and that’s how the attacks are initiated by India.” 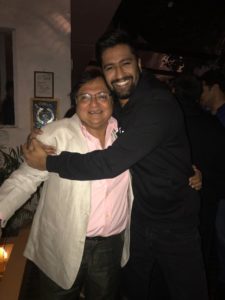 “More often I value such things as I know that whenever a director writes a script, usually he has certain actors in mind for some particular roles. But still my dilemma didn’t phase out. My elder daughter Ritika Bedi who also works in the industry as a talent manager came in as catalyst as she talked to the director Aditya and later pushed me in doing the film. I’m happy and respect Aditya Dhar’s decision to cast me in the film. It’s one of the most hilarious things I’ve done in my life. Though short, it leaves an impact,” he adds.

URI has been decalred a hit by the makers on account of which they held a success bash. It was attended by the entire cast and crew along with the who’s who of the tinsel town.

Student of The Year 2 Trailer Just dropped, and we are already rooting for Aditya Seal!