Skip to content
You are here
Home > Featured > Uri deceptive strike video has taken the internet by storm!

‘Uri – The Surgical Strike’ has released a new teaser today and it has taken the internet by the storm for showcasing surgical strike in such a seamless manner in a never before Video Innovation by any movie promotion.

Yami Gautam shared the one minute long video on her social media and wrote, “Movements so swift and actions so stealthy, that their attack will go unnoticed, this is Indian Army’s art of subtle deception. 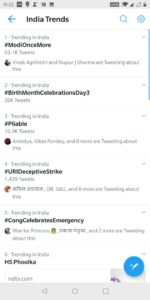 The video opens with Yami addressing a press-meet and a journalist asking her about her role in the film, to which she confirms that she will not playing a soldier in this action drama.

Next someone asks her if she would want to share any message to the soldiers to which she replies, “We and the whole country is very proud of you. We are here because of you.”

Lastly, someone makes a sarcastic remark that does she even know what surgical strike means.

To which she replies it is when someone comes strikes and leaves even before one realizes it.”

And this is when we see actor Vicky Kaushal along with two other soldiers walking to the stage from the background which previously appeared to be a poster. And Yami concludes by saying “like how these soldiers took position and you guys didn’t even notice it…”

This is truly the most interesting part about the video, which makes one want to watch the movie now. Ever since the teaser had been released, it has been trending on Twitter and people cannot stop talking about how they failed to see the the soldiers standing and shifting positions in the video.

Have a look at what they had to say:

What a wonderful Concept Team URI. Waiting for the Release : First Movie on Surgical Strike#URIDeceptiveStrike pic.twitter.com/KQBETA3wAf

#URIDeceptiveStrike totally blew my mind away! An incredible announcement and SO COOL! A definite Surgical Strike on my senses!

Uri is one of the most anticipated movies of 2019. The movie is based on the terrorists attacked an Indian Army camp in Uri in Kashmir, causing the deaths of 19 Indian soldiers and the surgical strikes that followed.