Marathi Filmmaker Samit Kakkad debuts in Bollywood with a Bold Film
Noted Marathi film director and producer Samit Kakkad makes his Bollywood directorial debut with the upcoming film ‘AscharyaFuckIt’. The film which is inspired by the writings of one of South Asia’s most revered writers, Saadat Hasan Manto revolves around an unlikely love story where desire and greed intertwines the lives of a Bollywood star, his chauffeur, a prostitute and her pimp
Filmmaker Samit Kakkad who is known for his work in Marathi cinema has directed Marathi films ‘Aayna Ka Bayna’ and ‘Half Ticket’ as well as co-produced films like ‘Raakshas’ and ‘Huppa Huiyya’. He has also worked on various Bollywood films in the past. With ‘AscharyaFuckIt’, Samit is working in a completely different cinematic space, unlike anything he has done in the past.
Samit likes to constantly reinvent as a filmmaker and work on different canvases. Says Samit, “I wanted to bring Manto’s complex characters to life on 70 mm but also wanted to tell a story that will keep contemporary audiences engaged. At the heart of it, AscharyaFuckIt is an unconventional love story and it is the idea of love that ultimately binds everything in the film.”
Talking about the film, he added “Manto wrote about characters on the fringes of society and captured their world and their voice.  The hope was to retain the spirit of Manto while updating it for the audience of today.  AscharyaFuckIt is, in essence, about worlds colliding. The film is about the Mumbai of today.  It is not a heightened version that is depicted in other films, but a more “truer” version of the city.” 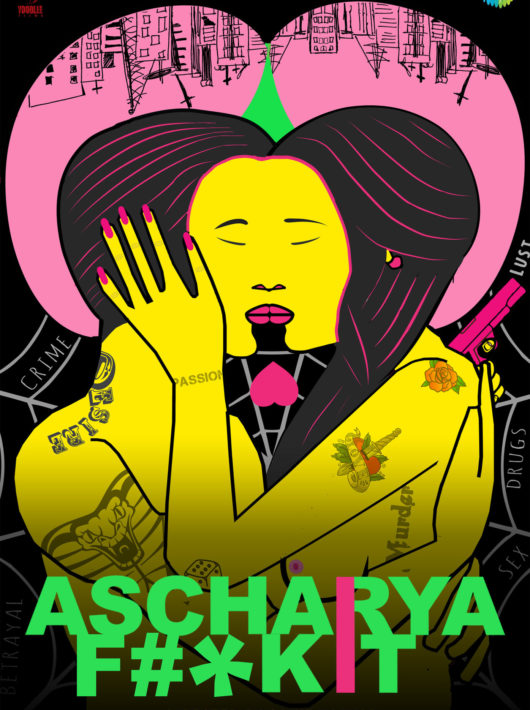 Aschariya Fuckit movie poster
The high-decibel trailer, peppered with explicit moments, indicates a no-holds-barred approach. The movie will be released by Yoodlee Films.
The film’s talented cast include Priyanka Bose, Santosh Juvekar, Ankit Raaj and Vaibhav Raaj Gupta among others. Produced by Vikram Mehra and Siddharth Anand Kumar of Yoodlee Films; story and screenplay by Amar Tipnis and directed by Samit Kakkad, ‘AscharyaFuckIt’ is set to release soon.