Skip to content
You are here
Home > Featured > Taking tangible action against #MeToo, Emraan Hashmi has moved briskly to a reading of the Sexual Harassment of Women at Workplace 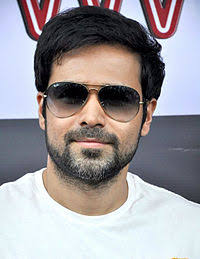 Taking tangible action against #MeToo, Emraan Hashmi has moved briskly to a reading of the Sexual Harassment of Women at Workplace (Prevention, Prohibition & Redressal) Act, 2013.

He has decided to incorporate practical clauses for men and women in all future contracts that are signed within his recently set up production house, Emraan Hashmi Films.

Emraan has partnered with T-Series (Bhushan Kumar) and Ellipsis Entertainment (Tanuj Garg, Atul Kasbekar) on the Soumik Sen-directed “Cheat India”, releasing worldwide on January 25, 2019. The first-of-its-kind film is a dramatic look at the malpractices in the Indian education system.

For all home-productions made after “Cheat India”, Emraan will have strict guidelines and a clear-cut code in production agreements to act as a deterrent and encourage appropriate behavior in the workplace. 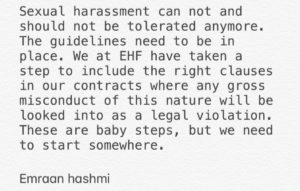 Known for his bold on-screen avatar, Emraan says, “I usually discuss the intimate scenes with co-stars in conjunction with the director to ensure transparency and comfort. There have been times when we have called off a kiss, an intimate scene, or an uncomfortable dance move if my co-stars were not comfortable.”

He adds, “Men need to be more cautious and sensitive, they need to get their act together. Women have found a voice and platform to be heard. Nothing remains or should remain behind closed doors anymore.”

“India’s youth can steer us towards a new dawn,” says Anand Pandit