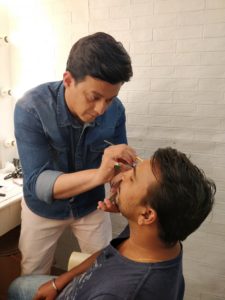 Versatility flows in Swapnil’s veins. Recently, while he was shooting for his upcoming drama series, he swapped his role with his favourite make up dada and showed his prowess by flaunting some of his own make up tricks and techniques on him. As we are acquainted of the multifarious and amusing characters he played on-screen,be it a chocolate boy in Mumbai –Pune –Mumbai, a doting father to an upcoming sportstar or a sportsman himself in Mi Pan Sachin or a bearded negative character in Ranangan but he enjoys to do it off screen too. The Super humble star expressed, ‘its always his efforts that makes me look like the character on screen so this time I took the charge of doing some beautification as a mark of gratitude.’

Anubhav Sinha Unveils The First Look Of His Next – ‘Article 15’ With Ayushmann Khurrana In The Lead!