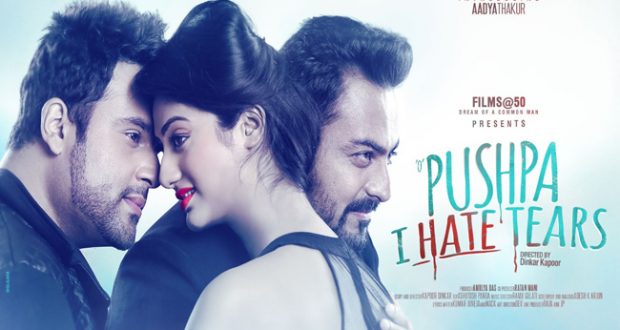 The upcoming film “O’ Pushpa I hate tears” has unveiled the second poster of the film. The poster is quite intriguing as its name. The name of the film is based on the prominent dialogue from Rajesh Khana’s cult film Amar Prem. Krushna Abhishek playing the role of Shyam and Arjumman Mughal playing as Pushpa will be seen as leads in the film. South Superstar, Karthik Jayaram is also playing an important role in the movie.

Under the banner of Films@50 in association with Wavelength Studios, ‘O Pushpa I hate tears’ is a unique combination of suspense, thriller, and comedy. The film’s story is written and directed by Dinkar Kapoor and produced by Amulya Das and Sujata Das, co-produced by Ratan Mani. Actor Krushna Abhishek, Karthik Jayaram, Arjumman Mughal & Anusmriti Sarkar are the leads in the film. The film is written by Adesh K. Arjun.

The music of the film is given by Ramji Gulati and lyrics by Kanwar Juneja, Pahwa and Mack. Cinematographer Arvind Sinh Puvar and Nilabh Kaul and film are edited by Rajesh Shah. Action by Kaushal-Moses and choreography by Lollypop. Sound design by Jitendar Sekhon, Executive producer Raja Saw and J.P.

In the other important roles of the film Anang Desai, Pradeep Kabra, Jimmy Moses, Melissa Pais, and Akhilendra Mishra, etc will be seen. As the first look of the film, the second poster also looks very promising and ‘O’ Pushpa I hate tears is all set to release next year on 07th February 2020.

On the poster launch, director Dinkar Kapoor quoted, the film has all the Bollywood flavors of suspense, thriller, and comedy. The star cast has done a fabulous job and hopes the audience will get their complete dose of comedy.

If I had a daughter she would have been like Kangana: Rekha!