Continuing with its unique style of cricket and entertainment Qu Play’s flagship Show “Quick Heal Bhajji Blast with CSK’ is back with another gem. Lakshmipathy Balaji, who once eclipsed even Sachin Tendulkar in terms of popularity in a certain Indian tour to Pakistan to the being the Gentleman of the game, took the hot seat opposite the now seasoned anchor and his former India Teammate Harbhajan Singh.
The episode starts with Balaji as Bhajji’s hostage, who then recounts a story from teen days where he was kidnapped by a rival team so that he would not play a match against them. Bhajji remarked on the bowling prowess of Balaji with his deceptive slower ones. Balaji recounted some of the struggles he had to face as a bowler while coming into the game. Balaji then shared how for inspiration his coaches used to talk about Bhajji’s dedication towards practice and line and length.
Harbhajan quickly turned it around to that remarkable Indian tour of Pakistan where everyone in Pakistan used to cheer for Balaji despite being an opponent and recalled how everywhere Balji went they would chant “Balaji zara dheere chalo”. His great performance with both bat and ball had won the audiences over including the then Prime Minister of Pakistan.

Bhajji recounted the IPL journey of Balaji from Chennai Super Kings, Kolkata Knight Riders and Kings XI Punjab and back to CSK. Balaji mentioned his stint at Kings XI Punjab to be spiritually rewarding as he learnt to recite “Ik Onkar” from his teammates and friends.
Bhajji prods on Balaji’s career threatening Injury and the remarkable comeback after. Balaji spoke about how he recovered and took help while learning how to email to find the right doctor for his injury. Balaji mentioned how Ashish Nehra helped him during the treatment and road to recovery. 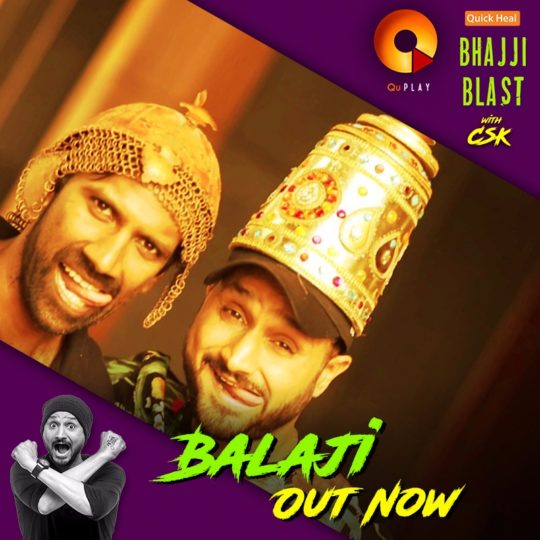 Bhajji asked Balaji about his family. Balaji remarks he misses his wife when he is on tour. He recounts how they met at a function and how she claims that they had a romantic courtship and how he feigns memory loss about holding her hand and telling her she is beautiful.
Then came the signature Rapid fire round where Yuvraj Singh’s casanova status was again stamped by Bhajji. At the end, it was all smiles as Balaji picked more bowlers than batsmen.

Catch the 7th Episode Streaming on QuPlay at

Anushka Sharma self-quarantined herself with her family and pets!

Seerat Kapoor secret behind the beautiful hair, Shares mesmerizing pictures, check it out

Do you know who gave Giorgia Andriani’s nickname Jojo, and how did it get revealed

Anubhav Sinha Unveils The First Look Of His Next – ‘Article 15’ With Ayushmann Khurrana In The Lead!