Skip to content
You are here
Home > Featured > In Manikarnika, Rani LaxmiBai’s army is her strength – Kangana Ranaut

”I want to pay a worthy homage to Rani Laxmibai” says Kangana Ranaut who has delved herself straightaway into post production of Manikarnika: The Queen of Jhansi after finishing the first schedule of Ashwiny Iyer Tiwari’s Panga in Bhopal.
While the film’s journey to the editing table hasn’t been smooth and easy, the actor – director has assured that the biopic is getting shaped up just the way she had envisaged with the women taking the centrestage. Considering the fact that the film is celebrating the fighting spirit, Kangana also pointed out that it was very important and crucial to cast and rope in female actors who would do complete justice to the fierce characters etched out for them.

”In the film Rani LaxmiBai’s army is her strength. It is full of women who had an irrepressible spirit and a flair for fighting. We have Ankita Lokhande, Mishti and many other actresses forming the army, we will reveal each character through the promotions”, says Kangana who is busy in putting the final finishing touches to the January 25th release.
While Ankita Lokhande will be seen playing role of JhalkariBai the warrior queen’s trusted aide and confidant, Mishti will be seen playing the role of Rani LaxmiBai’s friend who joins the war.
In an earlier interview with media portal, international action director Nick Powell had told how he had trained the stars including Ranaut and Lokhande in sword fighting and horse riding for the film and was really impressed by their resilience. ”We had a great time training together. We have stayed true to the spirit of Laxmibai as much as possible” added Kangana. 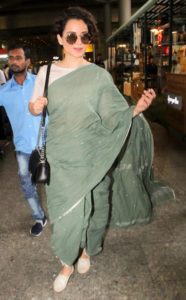 The period drama holding a very special place in her heart is evident. She says that it is the brave and courageous streak of the freedom fighter that resonated within her and struck a deep impact on her life. ”Growing up I was sensitive and obedient, but I would take off when I felt the need to break free. No one except my mother could speak to me at that time. Since childhood I’ve been a firm believer of woman power. We don’t need to empower girls, they are powerful as they are. We just need to not suppress them. We need to recognize and respect their subtle strength”.

Chintoo Bhosle confirmed reunion for ‘A Band of Boys’

Veteran actor Govind Namdev is at Shirdi, Maharashtra, to celebrate his 63rd birthday on Sunday.