Skip to content
You are here
Home > Featured > 4D sound technology used in 2.0

Director Shankar’s 2.0 is one of the most anticipated movies of 2018. The film starring Superstar Rajinikanth, Akshay Kumar and Amy Jackson will be released in Telegu, Tamil and Hindi. The teaser and the trailer of the film look very intriguing and promising.

Apart from the unique visuals, the sound of the film is been caught everyone’s attention. Oscar-winning sound designer Resul Pookutty has taken care of the sound in the movie. Though the film will be released in 2D and 3D, the sound used for the film in 4D. The 4D SLR technology is used in the film to give the audience a completely new and different experience. This is the first time this sound technology has been introduced in India.

While watching a movie in a theatre, the speakers on both sides or even above the watcher. But when it comes to 4D sound, the speakers would be under your seat.

Excited about this, Resul said, “2Point0 Historic moment first time ever in #SRL4D Sound from India. My best sound designed film ever.”

2.0 is truly an example of innovative art. The film surely promises the experience of a lifetime to its audiences. 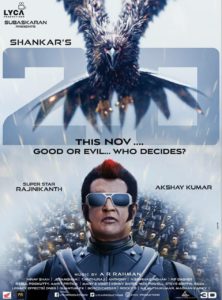 The Hindi version of the film will be presented by Karan Johar. Robot 2.0, produced by Subaskaran and Lyca Productions, will release across India on November 29 in 3D & 2D.

The teaser of Superstar Rajinikanth’s Kaala is all set to be released on March 1 2018.