Skip to content
You are here
Home > Featured > Star-cast of Nakkash uses the Cycles to spread love and peace through the Mumbai teeming thoroughfares!

Upcoming Film Nakkash’s team & star-cast held Cycle-Yatra through the Mumbai city’s teeming thoroughfares to spread love and peace in the Mumbaikers. Inspired by the infamous Juhu Cirlce Baba’s quote ‘Apne Dharam Per Chalo, Sabse Pyaar Karo’, Nakkash team started their Cycle-Yatra from Juhu Circle and passing the famous bungalow of Amitabh Bachchan, it reached Juhu Chowpati, where they became the ‘human-hoarding’. Inaamulhaq & Sharib Hashmi starrer film ‘Nakkash’ is set to be released on 31st May in the Indian Cinemas. The trailer of the film was released recently and is gathering a lot of praise and popularity since then. 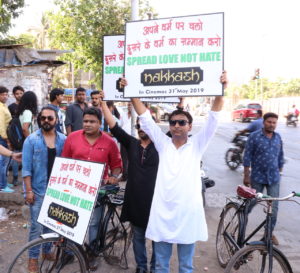 The acclaimed director Zaigham Imam, who has made the films on the communal unity and education before, said that Nakkash has been made with our blood & sweat and we are not leaving any stone unturned to publicize the film. According to him, the first day of the campaign was quite successful in spreading the awareness in the Mumbai public.
Lead actor Inaamulhaq, who has proven himself time and again by the heartfelt performances through the films like Filmistaan, Jolly LLB2 & Airlift, cycled throughout the way and said in his interview that he feels that the idea of becoming a human hoarding was really successful and a far better way than the hoarding on a pole. He believes that it was taken in a very positive way by the people as they had a yearning to ask questions about it, which spread the idea of peace between people, which is the central idea of Nakkash and that is why it is very crucial that the film like this reaches the viewers and teach the people of the country the way of love and accord between each other. 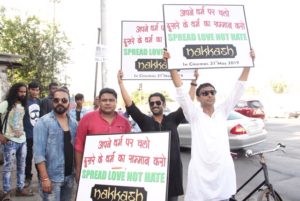 Sharib Hashmi, who has already spread love between two countries through his film Filmistaan, said that he was very impressed with the unique way of promoting the film and was happy with the response they got from the public throughout the way they were on the Cycle.
Set in Varanasi, Nakkash is the story of a brilliant and gifted Muslim craftsman, who engraves Hindu Gods in the womb-chambers of the Temples in the city, and through this, he becomes the symbol of harmony between both the communities. The film director, Zaigham Imam, who has been a successful journalist, said that he is very excited to see the positive response of the trailer. Nakkash is such a film which shows the face of today’s scenario of Indian society. We, the team of Nakkash, want to pass on the concept of unifying the whole of India through our film. Nakkash is repugnant to the hard-boiled people of any community, who hinder the unity of Muslim-Hindu and other communities in our country. 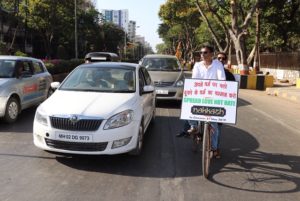 Pawan Tiwari, Govind Goyal and Zaigham Imam are the producers of this venture and Nakkash is releasing with the collaboration of Golden Ratio.

Uri deceptive strike video has taken the internet by storm!