“Yeh Hai India” a patriotic drama film is all set for the Indian Audience now. This film is a big hit on it’s world premier and won many awards internationally and now releasing in India on 24th of May 2019. Yeh Hai India” won best film and best director award at FOG film festival of America. It’s a story of a NRI man who came to India just to know more about his mother land. But when he came here he faces many problems and issues in society. He started working to resolve the issues. So is he got succeeded in his ambition? Let’s see in the movie. An ester egg for the audience is that this movie is not only about India it’s also about world. You will see many surprises like this in the movie. This Movie is produced by Sndeep Chaudhary and Directed by Indo Australian Director Lom Harsh who is known for his award winning filming. Director Lom Harsh is recently awarded by U.P.F. as a Youth Ambassador for Peace. 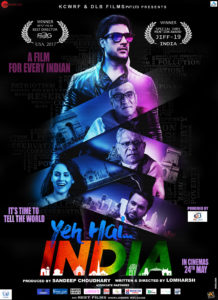 The lead role in this movie is played by Gavie Chahal and on his opposite Deana Uppal is there. You will see some senior and legendary faces like Mohan Agashe , Mohan joshi, Surendra Pal, Antara Banerjee, Vishal O Sharma, Jan O Bostock and  Major Bikramjeet. Film is shot across most of the India and you will witness the soulful music, rendered by Raja Hasan and Tapesh R Panwar and voices given by Javed Ali, Madhushree, Shahid Mallya, Raja Hasan, Nrs and Tapesh Panwar. On 30th of April Trailer and Music going to be launch after that you can listen it on various digital platforms. Film is made under the banner DLB Films pvt ltd and will be distributed by Reet Films.