Skip to content
You are here
Home > Featured > The big roar of Bal Thackeray gets cinematic experience, Nawazuddin outshines in the trailer!

The grand trailer of magnum opus Thackarey is out now. Nawazuddin Siddiqui will be seen playing the titular role.

When asked about being compared with Amitabh Bachchan’s portrayal in Sarkar, he said, “Nobody overshadows anyone. Everyone has a different personality. Looks can be taken care by the make-up artists but the real challenge is to have the same mannerisms and thought process.”

Talking about the references, the actor said, “It was difficult task to portray Bal Thackeray since he is probably the leader whose speeches are conversational.” 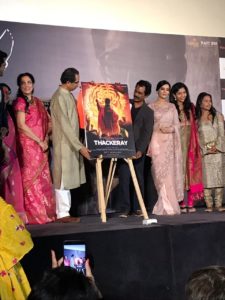 While Nawazuddin had done biopics such as Raman Raghav 2.0 and Manto recently, calling him as a biopic specialist, he laughs, “As an actor, I am far away from perfection, its just that I keep discovering myself over and over again.”

At the launch, the makers erected a huge set at the venue to create the atmosphere. They even displayed the antics of Bal Thackarey at the launch. The trailer launch is graced by the family and the entire cast and crew of the film.

Thackarey is based on the life of Bal Thackarey, one of most renowned cartoonists in the world of his times and founder of the Indian political party Shiv Sena. On Sunday, Nawaz took to his Twitter and shared his excitement for the trailer to be out.

With his strong resemblance and a similar body language as Bal Thackarey, Nawaz surely holds promise for thrill and entertainment in the trailer.
Produced by Viacom Motion Pictures, Thackarey is helmed by Abhijit Panse and is slated for January 25th, 2019 release in both Hindi and Marathi. 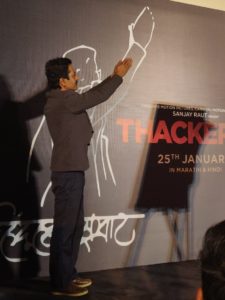 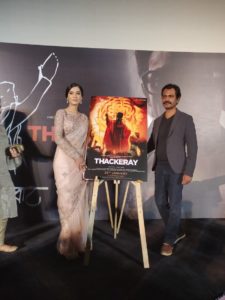 ISHQ : Solo Video song by Gorisha Nath is Out Now