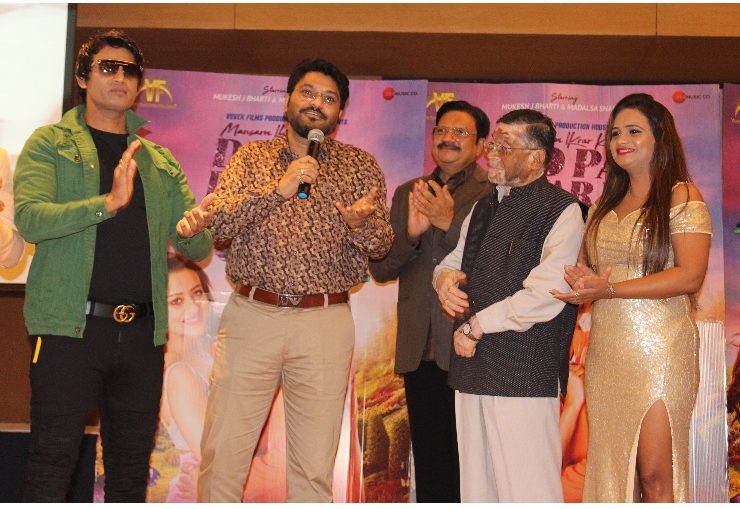 Sufi Song “Allah Allah from Mausam Ikrar ke Do Pal Pyar Ke launched  by Babul Supriyo and Santosh Gangwar
Delhi, 29th October, 2018: Babul Supriyo who sung Sufi number Allah Allah for the  movie “Mausam Ikrar ke Do Pal Pyar Ke” , launched the song in capitali along with actor Mukesh J. Bharti, producer Manju Bharti and S K Agarwal . After the song launch in the capital, the crew also addressed the media. The event was also attended by Union Minister Santosh Gangwar .He is the Minister of State (Independent Charge) for Labour and Employment. Babul Supriyo is the playback singer cum Union Minister of State for Heavy Industries and Public Enterprises.
Partho Ghosh, who directed the film, like Ghulam-E-Mustafa and Agnisakshi, has directed the film “Mausam Ikrar ke do pal pyar ke”. The film has been produced by Manju Bharti. Mukesh J Bharti, and Maddalsa Sharma are in the lead role Avinash Wadhawan, Arun Bakshi, Manju Bharti, Deepu Shrivastav and Neelu Kohli will also be seen in important characters. 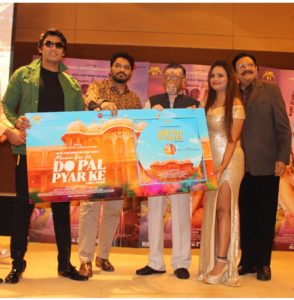 After long intervals, Bappi Lahiri has composed all the songs of the film, “Mausam Ikrar ke Do pal pyar ke”. Bappi Lahiri brings a new flavour of music to the audience which consists of romantic, party number as well as the Sufi Song. The lyrics are by Deepak Sneh. Bappi Lahiri, Armaan Malik, Palak Muchhal, Shaan, Brijesh Shandilya, Amruta Fadnavis and Babul Supriyo have given their voice in the film, the songs have been directed by the choreographer Ganesh Acharya.
This is the story of two young people Amar (Mukesh J Bharti) and Anjali (Maddalsa Sharma) who met each other accidentally as Amar got his hand fractured minorly while his way to college and Anjali helps him out by taking him to her home. After conversation they got to know they are in same college. Both started going to the college together and become friends soon. As the time passes, Anjali falls in love with him but he doesn’t.  In the meanwhile, Anjali’s father Raj’s friend Dhirendra an ACP of the city tries to convince him for Anjali’s wedding with his son. When Amar’s hand got fixed he returned to his home but Anjali started missing him and decided to propose him. But Amar rejects Anjali’s Proposal and breaks her heart. 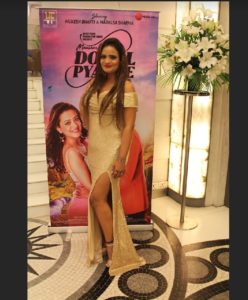 After realising her love for Amar, Raj persuades him to marry Anjali. He accepts the proposal and tells his mom to fly to Moradabad from Paris for the proceedings of the wedding. But tragedy happens and they come to know Amar is the son of an enemy back in college and immediately calls off the engagement and fixes Anjali’s marriage with his friend Dhirendra’s son. Now it will be interesting to see whether Amar will be successful in getting back her or Anjali will have to compromise with her life.
Film producer Manju Bharti said that “We have shot the film on very beautiful places according to the story, Amar and Anjal’s love story will take many twists and turns in the story which will be very much liked by the audience. Special thanks to Bappi Lahiri ji who has blessed us at every stage during the filmmaking. All the cast and crew has done a fabulous job and the songs are of all genre. The song Allah Allah sung by Babul Supriyo is a soulful song. ”
Mausam Ikrar ke Do Pal Pyar ke made under the banner of Vivek Films Productions will be released on November 2, 2018. 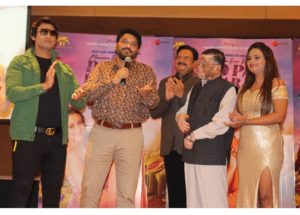 Seerat Kapoor wishes fans Happy Ramadan with a beautiful and inspiring message that shells out an impact on people.