Skip to content
You are here
Home > Featured > Sonakshi Sinha to be the next guest on Arbaaz Khan’s chat show Pinch, teaser out now!

Arbaaz who is hosting the show revealed the juicy teaser of the next episode that will feature actress Sonakshi Sinha.

She definitely knows how to pack a punch! Here's a glimpse of the next episode of #PinchByArbaazKhan Stay Tuned!https://t.co/EIe8oyJO3i pic.twitter.com/18sk8pyabG 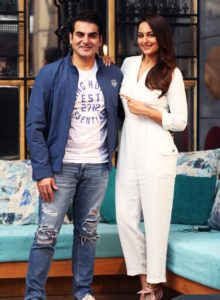 This season of Quick Heal Pinch by Arbaaz Khan has 10 episodes of approximately 20 minutes each and will be streamed online once a week on QuPlay’s YouTube channel. The show is written and directed by Abbiy Obheroii.

Kareena Kapoor to be the face of the Vanessa Perfume brand!