Skip to content
You are here
Home > Featured > Second schedule of Shonali Bose’s next begins in London soon!

Second schedule of Shonali Bose’s next begins in London soon!

Shonali Bose’s next film, tentatively titled ‘The Sky is Pink’ is all set to kickstart its second schedule in London. The film, produced by RSVP and Roy Kapur Films, wrapped up its first schedule in Mumbai recently and now the whole team is set to meet in London.

The film stars Priyanka Chopra, Farhan Akhtar and Zaira Wasim in leading roles. It is based on true events in the life of the young motivational speaker, Aisha Chaudhary. Priyanka Chopra will be joining from the US on 12th October and Farhan Akhtar will be coming from India around the same time. The shoot will take place in Central London and it is going to be a week-long schedule. 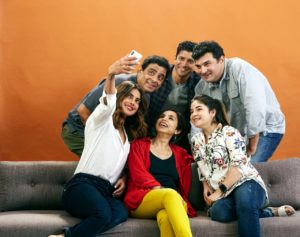 Sources close to the film confirmed, “As the film is based on Aisha Choudhary’s life, this schedule will cover the particular part of the family’s time which was spent in London. The shoot will commence early next week after the team arrives.”

Padmaavat, 102 Not Out makeover wiz in high demand for Southern films

Popular actor Swwapnil Joshi associates with the Government of Maharashtra for Elimination of Lymphatic Filariasis!