Some celebrities share a great rapport with not just their fans, but their peers, too. Karan Johar is known to be a good conversationalist and the latest guest on his chat show, Saif Ali Khan holds the same distinction. On the latest episode of KJo’s chat show, Saif and his daughter Sara Ali Khan, came together for the first time to engage in some interesting conversations and som genuine fun.

Sara, who will be seen in her first film Kedarnath soon, made her chat show debut with the show. Karan’s show is looked forward to by fans and celebs alike, since it features intimate moments with stars that are a rarity. Both Saif and Sara, were honest in their banter with KJo and their candid conversations turned into a fun episode. Sara also spoke about Kareena Kapoor Khan and the relationship they share. Saif, too, was at his witty best while talking about Sara’s potential boyfriend and more. 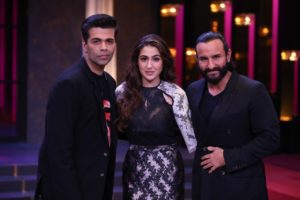 The new season of Karan’s chat show is certainly throwing up some interesting and entertaining moments. Saif and Sara’s stellar father-daughter bond was just one more highlight from the talked-about show.

PARI puts out another poster