Skip to content
You are here
Home > Featured > Patriotic Anthem ‘Vijayi Bhava’ from Manikarnika to be launched today!

Rani Lakshmi Bai was undeniably a fierce warrior who is an epitome of bravery and courage today.

She symbolizes patriotism and nationalism within every Indian. She fought for till her last breath for saving her beloved town of Jhansi from going into the clutches of Britishers in that era.

The makers are all set to release the first song from Manikarnika i.e. “VijayiBhava” today. It captures the warrior queen’s heroic spirit and showcases her strength in the film.

Musical maestro, Shankar Mahadevan, who has magically spun the music with his soulful rendition to the track, says, “In any musician’s career, a film like Manikarnika becomes a landmark dream project, which is challenging and musically enriching at the same time. I think we have been lucky enough to be offered projects like these and even after 50 years we can look back and say that we were proud ones to create music for this historic epic. The songs have got musical depth, lot of melody and emotion of patriotism. It is indeed a proud moment for Shankar Ehsaan and Loy”. The music has been composed by legendary musical trio Shankar Ehsaan Loy and lyrics have been penned by bonafide and ace lyricist Prasoon Joshi. 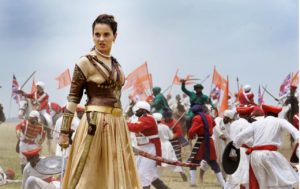 Speaking about the song national award winning actor Kangana Ranaut says, “Vijayi Bhava was recorded first, and is a massive scale song of war preparation. I’ve never done something of this nature before. It is upscale and has a high tempo which will be celebrated”.

Shariq Patel CEO Zee Studios has said, “The song celebrates the undying spirit of Rani Lakshmi Bai. Shankar’s voice and Prasoon Joshi’s words will stay with the audience for a long time”.

Producer Kamal Jain summed it up by telling, “It celebrates our fighting spirit, it will make you stand up for your country and take pride in it”.

Zee Studios in association with Kamal Jain presents the historical magnum opus Manikarnika : The Queen of Jhansi which will be showcasing the story of India’s first female warrior queen Rani Lakshmi Bai of Jhansi.

The film is hitting the silver screens on 25th January 2019 in Hindi, Tamil and Telugu languages simultaneously.