It was a star stuffed affair at the premiere of Taranjiet Singh Namdhari’s documentary ‘Sangeet – Saroop – Satgur’ which showcases the work done by Satguru Jagjit Singhji in mobilizing every youngster from a village called Bhaini Saheb in Punjab to learn classical music for 100 years. Present at the premiere was the current master of the Namdharis – Satguru Uday Singhji along with Ustad Zakir Hussain, Pandit Shiv Kumar Sharma among others.

The documentary portrays the impact of music and a 100-year-old legacy. Narrated through incidents by industry stalwarts who have promoted and catalyzed the process by imparting their knowledge to village children, filmmaker Taranjiet Singh Namdhari depicts one of the most astounding stories of a true patron of classical music. 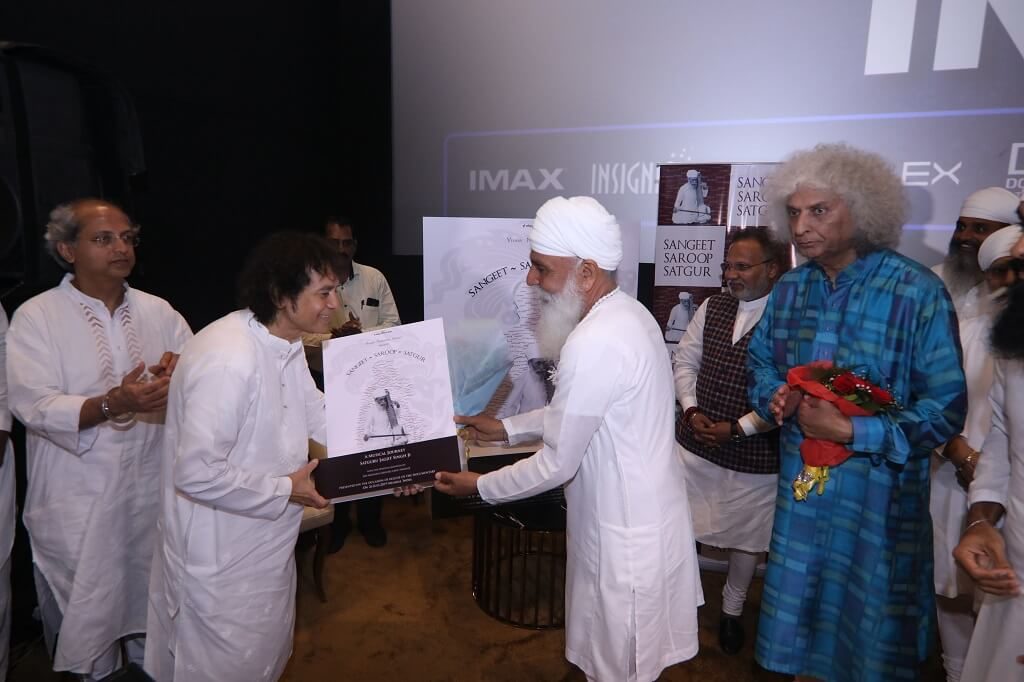 “Very few maestros have had such an impact on our generation in all spheres of life, on music, on spirituality or on life in general, educating everyone as to how they can lead an ideal life especially through the field of music. The blessings that Satguru ji gave us artists cannot be found in another parallel in this life or era of ours”, said Ustad Zakir Hussain.

“Satguruji’s efforts will be written in the annals of history with gold. His rhythmic play of the Tarab on the Dilruba was incomparable”, said Pandit Shiv Kumar Sharma.

Satguru Jagjit Singh was one of the biggest patrons of classical music in India and his love and dedication for it has inspired many a musician around the world. He believed that learning classical music everyday instills a certain discipline and focus in an individual, which is necessary right from childhood. As a young adult, he made it compulsory for all children in Bhaini Sahib to learn classical music.

The current master of the Namdharis – Satguru Uday Singh, has taken forward the tradition with equal vigor after Satguru Jagjit Singh passed away in 2012. From Bismillah Khan, Kishan Maharaj and Vilayat Khan to Pandit Shivkumar Sharma, Ustad Zakir Hussain, and Amjad Ali Khan, the tradition have attracted many a music maestro to Bhaini Sahib to impart their knowledge to the children. The documentary is a musical journey that discovers the hidden gems of Sri Bhaini Sahib, and the mesmerizing story of Satguru Jagjit Singh that has remained untold.

Zulfi Syed brings in the year with a bang!