4 years ago, I had been signed as the Writer and Director for the film ‘Fraud Saiyyan’ by Prakash Jha Productions. My joy and excitement knew no bound then because apart from the opportunity to make my second Film I was also going to be working with a banner I hugely respected. I thought I was going to be in very safe hands.
The Creative differences began from the beginning of Filming but I genuinely believed that they could be tackled and I managed finish the shoot as well as the edit as decided. Then suddenly and rather abruptly I was sidelined and cut off from the project without any given reason. 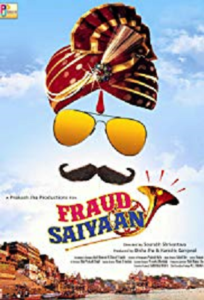 I was hurt and bewildered but I still let it be. I didn’t question anything out of utmost respect for the Producer. Subsequently, the film got stuck for 3 years over a dispute of the banner with its financiers. I lost all hope and gave up on my film that I had invested years in. I moved on.
However, last month, as abruptly as earlier, I was informed that the dispute was settled, the film was about to release and that I was expected to appear for Press Conference. Oh yeah, I could also watch the Film. Everything had been ‘handled’. The posters and teasers had been created. My name appeared in fine print along with other credits.
Keeping my heart break and self-respect aside, I went to watch the Film only to realise that the edit had been changed completely. The Bgm had been scored in my absence and I was merely being shown the final product. This was almost entirely a new Film.
I dont wish to comment on whether this version is good or bad. It has been done under the supervision of such a veteran film maker whose work I respect immensely. I cannot and don’t want to question that. But I do want to state that this is NOT my film anymore. Its not what I have made or wanted to make. This was not the script I pitched and we agreed upon. Hence I would like to dissociate from the Film and have requested the Producer to remove my name from it altogether.
#fraudsaiyaan