Very rarely does one enter the world of films to hit it out of the park with a 200-crore worldwide grosser in the very first attempt .However, that’s what Chrome Pictures managed to do.

Founded by Amit Ravindernath Sharma, Aleya Sen and Hemant Bhandari , Chrome Pictures carved a niche for itself in the competitive world of advertising having worked with some of the biggest global brands.

With their first feature film Badhaai Ho, the young visionaries have proved that they are here to stay as the movie went on to set a benchmark at the domestic and overseas box office, while grabbing everyone’s attention with its riveting subject and storyline.

Known for some iconic advertising campaigns Chrome Pictures decided to foray into cinema with the aim of telling stories that are relevant yet out of the box. 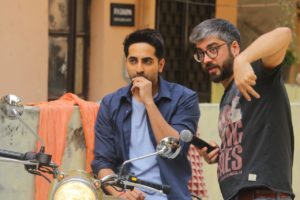 With the blockbuster success of Badhaai Ho, the millennial’s marked their entry into Bollywood industry with a bang, reiterating that a great idea needs no mentorship, fancy sets or industry godfathers.

Says director-producer Amit Sharma, “My biggest learning from the success of Badhaai Ho has been that content-driven films — films which have a good storyline are going to work. The story of this film was initially meant for a television commercial and as luck would have it that didn’t materialize .The rest is history and it feels surreal that the story we worked on for 2 years has now crossed 200 crores” Adding that, “I come from a very simple background and There is a lot of hard work in making Chrome Pictures a dream come true! It is here we create many worlds, many realities, touching the hearts of people. We trust audiences will accept genuineness, and we have pushed our realities towards that. We are very much grateful to them.”

At a time where content is the undisputed king at the box office, Chrome Pictures has finally arrived -equipped with breakthrough ideas, honest storytelling and years of production expertise in bringing these stories to life.

Co-founder Aleya Sen adds, “The beauty of Chrome lies in its unity in variety. We love to experiment with genre’s, style and technical methods. Amit, Hemant and I share similar passion towards filmmaking. The plan is to move ahead with utmost sincerity towards making good, content-driven cinema.”

Hemant Bhandari says, “It’s an interesting time for filmmakers with new avenues opening up. At Chrome, we are looking to invest in new interesting concepts.”

With years of experience and expertise at their craft, Chrome Pictures today boasts of a refined production team that has won innumerous national – International awards and felicitations. The production house is ready to roll with an exciting slate, details of which are under wraps at the moment.

The remarkable transformation of seerat kapoor will give you major fitness goals, check out the picture