Skip to content
You are here
Home > Featured > Cactus: A Pictorial Map Of The Torturous Journey To Celebville

Ace photographer, Somsubhro Sarkaar has always had an affinity toward capturing the female form. His ultimate creative inspiration, whether it is the common woman in his award-winning series #My IdentityMyPride or the flitterati, has encouraged him to produce his next series ‘Cactus,’ which reveals a story of pain and agony, similar to what one faces in the fashion and film industry.

‘Cactus’ is a pictorial roadmap filled with torment, heartbreak, sleaze, and physical and mental torture, akin to what one feels if one were left on a dry desert highway with nothing but thorns and sand for company. 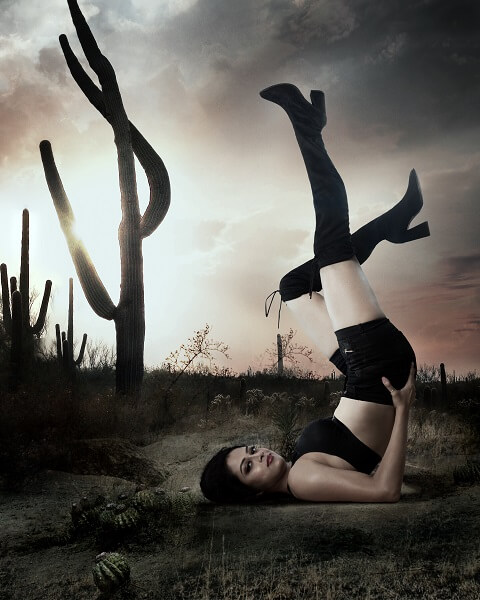 It is the perfect comparison to the situation of all those women who enter the fashion and film industry with stars in their eyes and end up facing the harsh reality that breaks most and makes just a few. Som’s usage of the desert backdrop only amplifies their agony which he tries to portray through phallic metaphors or through the concept of desert bats.

Known for creating a sensation on OTT platforms as well as in Tollywood (Telugu film industry) with Gangster Gangaraju Vedieka Dutt’s serene expressions portray the emotion that a woman carries most of the time in the industry, while hiding her grief, pain and humiliation behind those deep eyes and a coy smile.

As he began developing on this concept, Som decided to begin collaboration with the magical Baban Kharat (make-up and hair artist) and the versatile fashion stylist Varsha Jadhav.He thanks the maverick creative director, Abhijit Mallick (known for the image building of many reputed fashion brands) for his selfless involvement and guidance too. With this team, Som has created a set of four stunning images that would mimic an actor’s emotions. Som, who believes that a photographer can tell a story within a single frame, says,“Whenever I see a Cactus, its beautiful form attracts me. But the minute I get close and try to touch it, it hurts me. I find the cactus’ very avatar similar to that of the entertainment industry. The glitz and glamour can draw you towards it but at the same time can harm you too.”

Young Superstar Urvashi Rautela becomes the first Asian Indian actress to be on the cover of Iraq’s no. 1 Magazine