Skip to content
You are here
Home > Featured > After garnering rave reviews and storming Box Office Worldwide, Dhanush to launch the trailer of his Hollywood Debut, The Extraordinary Journey of the Fakir!

Dhanush starrer The Extraordinary Journey of The Fakir has been buzzing in the international circuits, winning accolades and audience appreciation. The film which marks the Hollywood debut of National Award winning actor Dhanush has been screened in many film festivals, not only received rave reviews, and swept away awards as well.
The Indian trailer of this movie will be releasing on June 4. The announcement was made by unveiling a new poster of the movie. In this poster, we can see Dhanush emerging out of a box with an Eiffel Tower in the backdrop. We can also see some glimpses of Dhanush’s character in the form of photographs in this poster. 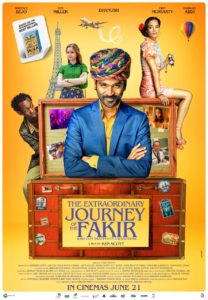 The movie Extraordinary Journey of The Fakir, is based on the book by Romain Puértolas and it is revolves around an Indian street magician’s journey to Paris. Finding himself in the midst of a crazy adventure he never bargained for. The film deals with the problems of refugees across the world but despite handling a rather sensitive subject, the film seems to be filled with light-hearted humour.

Interestingly, Dhanush, who is a superstar in South, hit a century at the box office with his Bollywood debut Raanjhanaa. Considering his huge fandom and content which is already being praised, the buzz around his Hollywood debut is quite high.
The Extraordinary Journey of the Fakir is directed by Ken Scott and produced by Saurabh Gupta, Gulzar Singh Chahal, Aditi Anand, Samir Gupta, Luc Bossi, Jaime Mateus-Tique, Gregoire Lassalle, Genevieve Lemal and Co-Produced by Abhayanand Singh and Piyush Singh from Golden ratio who are also presenting the film.

The Extraordinary Journey of The Fakir will be releasing in India, USA, Canada, UK, Singapore and Malaysia on June 21, 2019

Aditya Dhar wishes a normal life on his birthday