Written and Produced by India-born Michael E. Ward, BOMBAIRIYA is inspired by the 13 years he has spent in Mumbai with director Pia Sukanya, whom he married in the city 5 years ago.

The movie is a situational comedy with a pinch of mystery and drama. The genre of comedy juxtaposed with mystery has been very rarely explored. 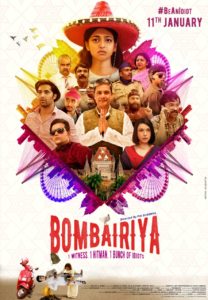 Says Michael, “I would describe the resulting film as an epic intimate comedy, a heart-warming feel-good film for anyone who loves Mumbai or who might hate it, but is open to loving it again! It’s also for anyone who loves comedy or seeing how brilliant serious actors handle it when the director and her vision gets 100% backing.”

The sultry & fierce, Sherlyn Chopra finally unleashes the rapper within her with the release of her debut rap single, Vote Daal!

Bappi Lahiri sings while Sachin Pilgaonkar cuts his 60th Birthday cake in the presence of Sachin Tendulkar, Raj Thackeray, Asutosh Gowariker and many others