Skip to content
You are here
Home > Featured > Actor Sahil Anand is thrilled to be a part of the second instalment of Karan Johar’s Student of the Year! 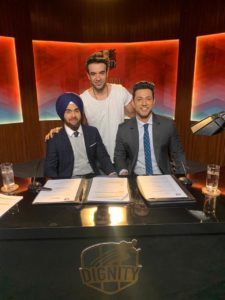 Nostalgic time!
Actor Sahil Anand is thrilled to be part of the second instalment of Karan Johar’s Student of The Year. The actor was part of the first one as well and says that the shooting was a blast. “I was part of Student of The Year and I am part of the sequel SOTY2 (Student of the year 2) as well. I have a special appearance in it. The experience of shooting the first one was very good because Punit Malhotra is just like a friend and I am comfortable working with him,” he says. He further adds,working again in SOTY got me a lot of memories in mind. So I was very excited ans nervous also as in this I had to do a little commentary and I have never done commentary but Puneet made sure it goes well. But it went so good that I really enjoyed and I am really happy to do that.

The actor has also done other films such as Hai Apna Dil Toh Awara and Love day.

It is fight against the religious bias for Vipin Sharma in his next web original Satyameva Jayate, trailer out now