Ever since the highly anticipated trailer of URI: The Surgical Strike released on Wednesday morning, it has been creating a stir across borders. It is impossible to deny that the hard hitting trailer of the film has emerged as a winner and has provoked the patriotic sentiments of the audiences. The unexpected reactions of the trailer left jaws dropped especially the social media that caught fire and initiated political debates amongst Twitterati and YouTubers across borders with #UriTrailer & #UriSurgical Strike related hashtags Trending in Pakistan As well.

Keeping in Mind the Tag Line of the Uri Trailer that dropped 2 days ago, “ Yeh Naya Hindustan Hai, ye Ghar mein Ghusega bhi aur maarega bhi” , Indian Twitterati targeted Pakistan Net Space by bombarding Uri Trailer in the Pakistani Net Space on Twitter & Youtube. Many Pakistani Netizens woke up on 6th December seeing the URI Trailer trend on their screens. It is surprising to know that no film trailer till date has caused a storm like this. Amid political disturbance in forms of debates on social media, thousands of people took to their twitter account and expressed their share of agony and jubilation depending on which side of the border was the tweet from.

On Friday, right after the Jumma Prayers Indian Twitteratti claimed Victory and trended #WeDidIt In Pakistan Twitter and Termed it as “Uri Digital Surgical Strikes” which in turn trended in India till wee hours last night.
India and Pakistan have had strained relations , armed conflicts and Bitter rivalries ever since the Partition & Independence of Both Countries from the British Rule which has translated into 3 Full Scale Wars and Skirmishes on a daily basis.
These Twitter and Youtube exchanges have also led to a lot of heat between the netzens of two nations with political leaders & Journos  from both countries tweeting and fanning the fire. 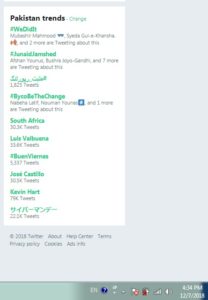 Pakistani Twitteratti seemed to share a video of Jaish E Mohommaed Terrorist Hafiz Saaed asking the Indian Army to show proofs of Surgical Strikes and Took potshots at the film for creating propaganda. Pakistani Journalist Mona Alam claimed that “Claims of #SurgicalStrikes In India Were so fake, sooo fake that 2 years later in 2018 #Bollywood had to film it into a movie to make it look real #UriTrailerStrikes”

The film highlights the unfortunate event of Pakistani soldiers invading and attacking Indian soldiers on September 18th, 2016. In return, on September 29, the Indian Army’s Special Forces carried out surgical strikes on terrorism across LOC (Line of control). 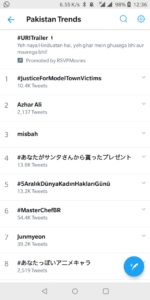 URI stars Vicky Kaushal along with Paresh Rawal, Yami Gautam, and Kirti Kulhari in the pivotal roles. Produced by RSVP movies and written and directed by Aditya Dhar, the film is slated to release on January 11th, 2019.

Vijay Vikram Singh begins shooting for The Family Man 2, juggles between the show and Bigg Boss 13