Skip to content
You are here
Home > Featured > Shop, Eat, Mingle and Be Merry at “The City Festival’ by Elpro City Square Mall 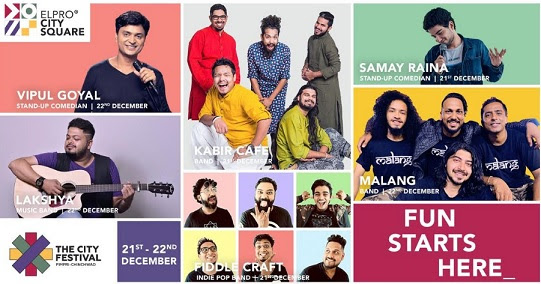 Shop, Eat, Mingle and Be Merry at “The City Festival’ by Elpro City Square Mall

With the wonder of winter and glow of the lights, Santa Claus rides his way to Elpro City Square mall at Pimpri-Chinchwad, Pune on 21st and 22nd December 2019 with surprises for all its visitors. It’s time to be jolly as everyone is gearing up to end the year on a high note. Setting the perfect mode for celebrations, Elpro City Square mall is all set to host the biggest event of the year – The City Festival. Highlights of the festival are –

Say cheers to the Beer and Wine Festival, laugh-out-loud at the stand-up act by Samay Raina and Vipul Goyal, go shopping crazing at the Flea Market, drum away to Nirvana at the Drum Circle, join the Zumba and Bollywood beats workshops, groove to live band Malang and Fiddle Craft, let the child in you out at Kids Carnival and much more.

Full of entertainment acts, festival eats, treats and gifts, The City Festival by Elpro City Square, has a lot of cool things in store for you to catch up! It’s your chance to come and feel the holiday cheer with your family and friends. Enjoy the last weekend before Christmas with fun-filled activities to pick and choose from.

So, get your festive spirits high and head to the biggest City Festival of the season at Elpro City Square mall, Pimpri-Chinchwad, Pune. Shop for Rs. 5000/- and get an all access pass for the two-day festival at Rs. 99 only.

Iulia Vantur Comes Forward To Support The Heroes At Sheroes

For Yoodlee Films, regional pastures appear to be greener than usual