The book was released by Alia Bhatt, Mahesh Bhatt, Pooja Bhatt, Rahul Bhatt and Soni Razdan who came out in support of Shaheen

“I’m silent but the screaming won’t stop, I’m calm but the restlessness goes on, I’m smiling but my frown won’t fade, I’m laughing but the tears don’t die away, I’m living but that won’t stop death from coming my way”- a young Shaheen Bhatt wrote in her journal at a tender age of 15.

Depression has surged to epidemic proportions in today’s overwhelming times. In a country like India, opening up about mental illness is not considered worthy of attention and is still sometimes interpreted as a sign of weakness. However, there are a lot of people who’ve been living with clinical depression and want to share their stories in order to encourage others to not treat depression as a character flaw. Shaheen Bhatt, daughter of ace director Mahesh Bhatt and sister of actress, Alia Bhatt has written about her battle with clinical depression in her debut book ‘I’ve Never Been (un)Happier’ as she commits to mental health awareness. The book was unveiled by the entire Bhatt family – Mahesh Bhatt, Soni Razdan, Alia Bhatt, Pooja Bhatt and Rahul Bhatt on the 4th of December in Mumbai. ‘I’ve Never Been (un)Happier’ highlights Shaheen’s journey of coming to terms with depression and accepting it as she reveals the daily experiences and debilitating the big picture of one of the most critically misinterpreted mental illnesses of the twenty-first century. 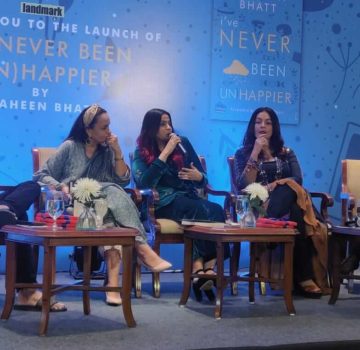 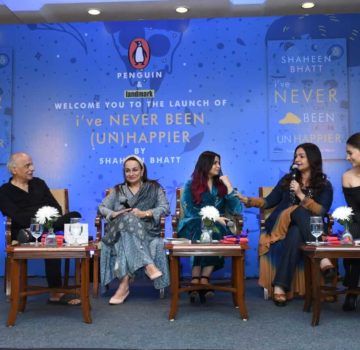 Two giants from the book industry, Landmark and Penguin joined hands to successfully launch the emotionally arresting memoir. In this book, Shaheen invites you into her head and takes you through the personal pendulum of understanding and living with depression.

During the launch of the book, Shaheen said, “I’ve Never Been (Un)Happier is my heart laid bare on a page and I wrote it with the hope that it could lend its voice to the growing conversation about mental health in India.”

Speaking about the book, Alia said, ‘Shaheen’s book is not only for people living with depression and anxiety. It’s for family, friends, and caregivers too. It isn’t easy to watch someone you care about suffer and reading this book has given me insight into what it’s like to live every day with this illness.’

Landmark and Penguin Random house brought in elements that resonated with Shaheen Bhatt for the launch of her multi-dimensional, philosophical tell-all in Mumbai on 4th December.

Bollywood would come down to UP to scout talent, says Gaurav Dwivedi at Lucknow Film Forum

My family is my pillar of strength: Kangana Ranaut