Skip to content
You are here
Home > Featured > Richa Chadha joins the likes of Barack Obama and Will Smith in The House of Commons Book of Tribute to the late Nelson Mandela!

During her recent visit to London, Richa Chadha was approached for a unique project and will now be the only Indian actor to have her hand writtten message featured in a unique booked called the, The House of Commons Book of Tribute to the late Nelson Mandela, former president of South Africa and a world leader. It’s a book that has hand written messages by over 700 prominent personalities across the world Including former President Barack Obama, David Beckham, Sir Paul McCartney, Sir Richard Branson, Maya Angelou, Russell Crowe, Chris Rock, Kylie Minogue, Will Smith amongst others. The book will soon be published and will be made available globally. The proceeds from sales in each country will go towards fighting Child Poverty in that country. The book is a major tool to help continue Mr Nelson Mandela’s mission to end child poverty and racial intolerance. 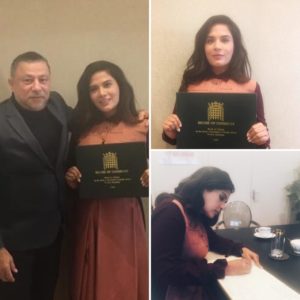 Nic Careem, the founder of the House of Commons book of Tribute to the former president of South Africa Nelson Mandela extended his gratitude towards Richa to write her message in the book in support of the cause.

Richa said, “I met Nic when I was in London recently. He has been working really hard to get together this amazingly conceptualised book which is the House of Commons book – an homage to one of the world’s biggest iconic figures, not just in the world of politics but as a human being, the Late Nelson Mandela. His struggle as a world renowned leader to fight for rights of downtrodden people of his race has made him a legendary inspiring figure. I’m elated to To be part of this book which is so thoughtful to have handwritten notes, To embody his contribution and to have heartfelt messages by such accomplished people is a great way to know how and what people thought and continue to think of him even today.“