Recently in the first look of the much awaited biopic, Shakeela; Richa Chadha looked every bit stunning in the image in which she donned South Indian style gold on her body standing against a wall inscribed with various comments and abuses Shakeela was given despite her successes.

Now an interesting part of the image which the makers have just revealed is that the image actually was inspired by a classic image of not Shakeela but that of Silk Smitha. And there’s a special reason behind it. The poster of Shakeela Biopic is inspired by a film of Smitha, titled Miss Pamela in which the poster has Silk posing in only gold jewellery. The reason for the inspiration was that they wanted to pay an homage to the Late Silk Smitha who has an untimely tragic demise, which lead to the rise of Shakeela’s popularity and had it not been for Silk to pave the way with her unapologetic choices, Shakeela wouldn’t have been so popular. 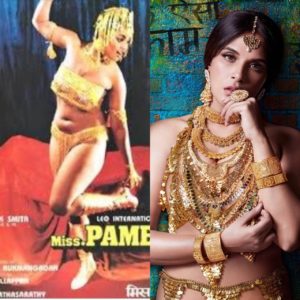