Skip to content
You are here
Home > Featured > Nishikant Kamat ; Director of Force, Rocky Handsome and Drishyam Passes Away in Hyderabad

Director and actor Nishikant Kamat passed away on Monday around 10.30 am. He took his last breath in a private hospital in Gacchiboli Hyderabad. The process of bringing his body to Mumbai is currently on. Kamat was reported to be battling liver cirrhosis. He was 50. 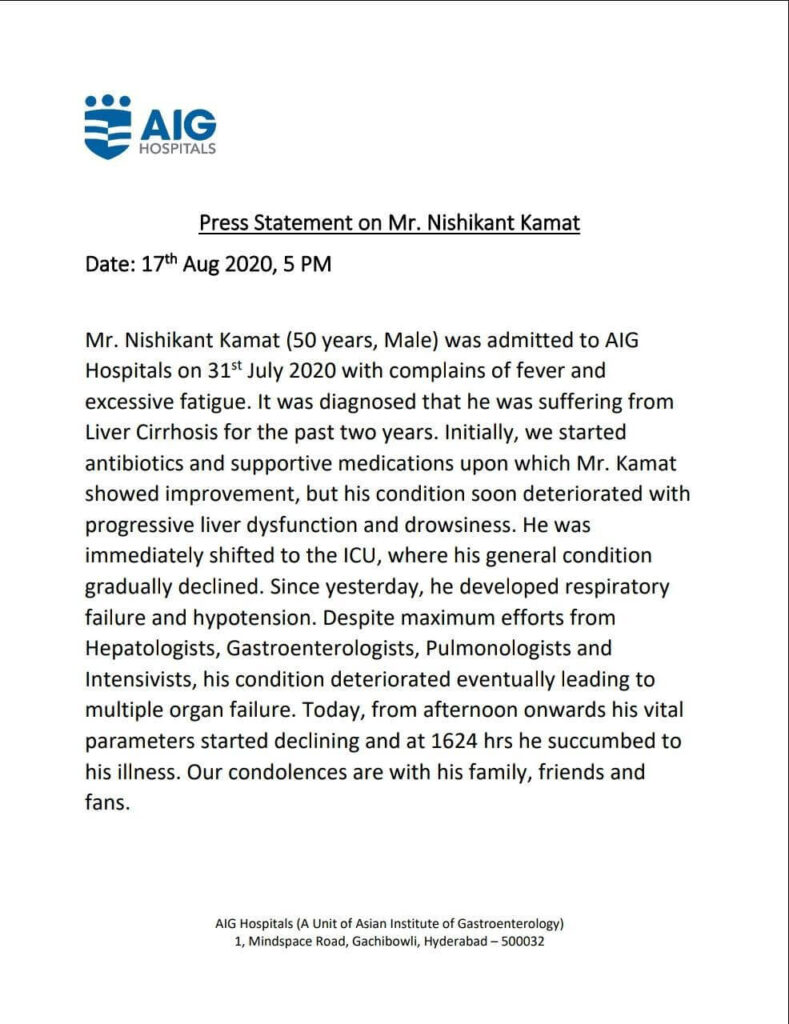 Nishikant Kamat is known for directing Bollywood films like the Ajay Devgn and Tabu starrer ‘Drishyam’, Irrfan Khan starrer ‘Madaari’ and the John Abraham starrers ‘Force’ and ‘Rocky Handsome’ among others. He made his first Bollywood film ‘Mumbai Meri Jaan’ in 2008. The movie was based on the 2006 Mumbai bombings.

He has also directed critically acclaimed Marathi films like his debut directorial Dombivali Fast. Dombivali Fast won National Film Award for Best Feature Film in Marathi in 2006. He also featured as an actor in the Marathi film Saatchya Aat Gharat.

Nishikant Kamat didn’t limit himself to just films. He also dabbled in other mediums. He was the creative producer of the web series The Final Call and Rangbaaz Phirse.

Kamat was also known for acting in films such as Daddy, Rocky Handsome, Julie2. He was last seen in Vikramaditya Motwane’s ‘Bhavesh Joshi Superhero’ starring Harshvardhan Kapoor. He was directing a project titled Darbadar which is scheduled for the 2022 release.

Many famous personalities from the entertainment industry such as Riteish Deshmukh , Ajay Devgn, Satish Kaushik as well as political field give last rites to Nishikant Kamat on social media.