Skip to content
You are here
Home > Featured > “Mike Tyson has always been my Idol since childhood” : Sahil Khan

“Mike Tyson has always been my Idol since childhood” : Sahil Khan
Mumbai 28th September 2018: Sahil Khan has always been associated to Fitness, Professional Body Building and various wellness industry. Sahil Khan is popularly known as Official Fitness Icon of India (21st Rajiv Gandhi award). He owns India’s Luxurious Gym called Life Fitness. Actor come Fitness Entrepreneur is now associated to Kumite 1 league. Mr. Khan will now be a part of Kumite 1 League as a Mentor for Indian MMA Stars in Mumbai this September.
Mixed martial arts is a full-contact combat sport is now in a high scope now in India. Despite of India having a huge fan base for Cricket, Football, Kabaddi etc. MMA has a burgeoning rise   few years. Kumite One League has now come up with its First Edition in Mumbai, India. Not only male fighters but Female MMA fighters will be a part of this league.
Mr. Sam khan is now directing the Kumite 1 League in Mumbai. Mr. Khan is not only a Bollywood Director but also the CEO of Mud Skull Adventure Pvt. Ltd. Mike Tyson, the incredible American Boxer launches Kumite One League and is organized by Kumite One Association. The launch itself on September 29, 2018 will begin with an immense where Team India will fight against Team UAE. Sahil Khan will now mentor MMA fighters from India in this league. 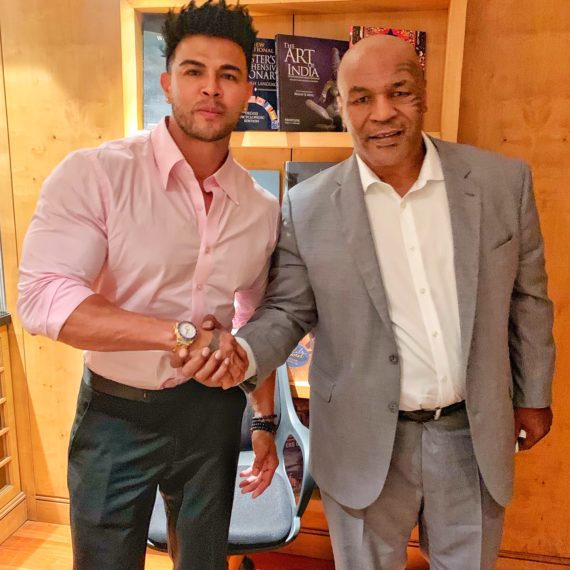 Sahil Khan & the Legend Mike Tyson
Sahil Khan quoted “Mike Tyson has always been my Idol since childhood. Having K1L in Mumbai especially with Mr. Tyson is like dream come true. It’s a pleasure to be a part of K1L and being a mentor for my Indian MMA fighters”

Vidya Balan to play the lead in a film on Shakuntala Devi’s life!