The filmmakers are always in search of stories and even they can extract a story from the warmth of the valley. The filmmaker Dhiraj Mishra is all set to present his film “Gaalib” from the valley. The story is inspired by the struggle of a terrorist Afzal Guru’s son Gaalib. The film is produced by Ghanshyam Patel, co-produce by Nimisha Amin and directed by Manoj Giri. The trailer of the film has been launched on social media and the film will hit the theatre on 11th December 2020. The role of Afzal Guru’s wife is played by sita fame Dipika Chikkalia, Kashmir based actor Mir Sarwar as Afzal Guru and Nikkhil Pitaley as Gaalib. The film had been shot at Bhadarwah and Prayagraj. During the making of this film, Dhiraj has to face a lot of obstacles and moreover to convince Dipikaji was also a tough task.
Dhiraj Mishra has written the story of the film along with Yashomati Devi which has taken almost a year. Other actors are Anil Rastogi,Ajay Arya ,Ajay Rawat , Megha Joshi and Vishal Dubey.

The film Gaalib is based on the ups and downs of Gaalib’s life and the situation of Kashmir. 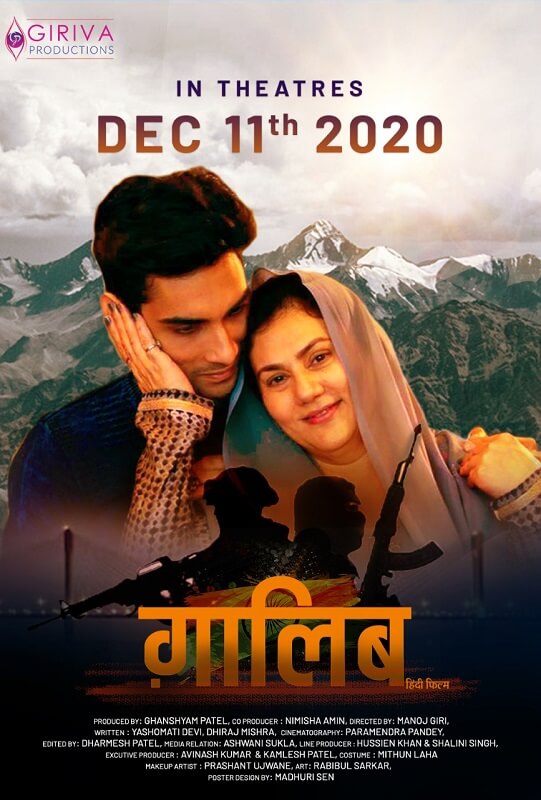 The beautiful valley of Kashmir has been suffering from the menace of terrorism since the ’90s. Gaalib’s father was found guilty for the attack on Indian Parliament in Delhi and was sentenced to death. Before dying Gaalib’s father wanted Gaalib to focus his attention only in studies and not to tread the path taken by his father. After his father’s death, Gaalib’s mother starts raising him but even if she wants to do so, she fails to lead him to the right path. But Gaalib’s life reaches a turning point after meeting one of his school’s teachers, who brings an immense change in his life with his positive thinking. Gaalib is highly influenced by him and eventually tops high school exams in the whole of Kashmir.

Anangsha Biswas shares her experience working on the sets of Hostage 2, says ” Ronit Roy is an encyclopedia “

Sherlyn Chopra tweets about drug controversy, says, ” if you are addicted to yourself you don’t need any other drug”