Skip to content
You are here
Home > Featured > Ambati Rayudu gets candid on Quick Heal Bhajji Blast on his aggression, his famous homecooked Biryani & laidback lifestyle

In one of rare interviews that he has given, Ambati Rayudu one of the most attacking batsman of the Indian Cricket Team got candid & more in his appearance in Harbhajan Singh’s Chat Show, Quick Heal Bhajji Blast on Quplay TV. Ambati Rayudu who is known for on field exploits & aggressive batting is however an Introvert in real life. The Show started with Harbhajan Singh trying to speak like a True Blue Hyderabadi & Amabati teaching him the new catchphrases. From talking how laidback Hyderabad & Hyderabadis are , the conversation shifted to how Harbhajan & Ambati are both known for their aggression.
Rayudu and Bhajji discuss how they started playing cricket where Ambati Rayudu talks about his first big innings against England. Harbhajan reveals that Rayudu is a complete introvert and a recluse when it comes to partying or giving interviews.  Harbhajan spills the secret that Rayudu does not keep a phone on him while Rayudu shares that he watches movies back to back to keep his mind occupied. Rayudu and Harbhajan reminiscence about their time playing for Mumbai Indians where Rayudu revealed that his batting improved a lot playing alongside the Greats Sachin Tendulkar & Ricky Ponting. Bhajji made a startling confession of facing Rayudu’s aggression on field.

Conversation shifted towards food where Bhajji revealed that Rayudu’s home cooked hyderabadi Biryani is the best he’s ever tasted where Rayudu recounts an incident when in Raipur a hotel where the team was staying didn’t allow Rayudu to bring in his homecooked Biryani for everyone which angered the captian Cool Dhoni and he ordered the management to change the hotel. Rayudu further reveals the secret behind Hyderabadi batsmen being very wristy and his experiences grooming under VVS Laxman & Azharuddin. The episode ended with laughs with Rayudu commenting on how everyone pretends to be so busy these days. 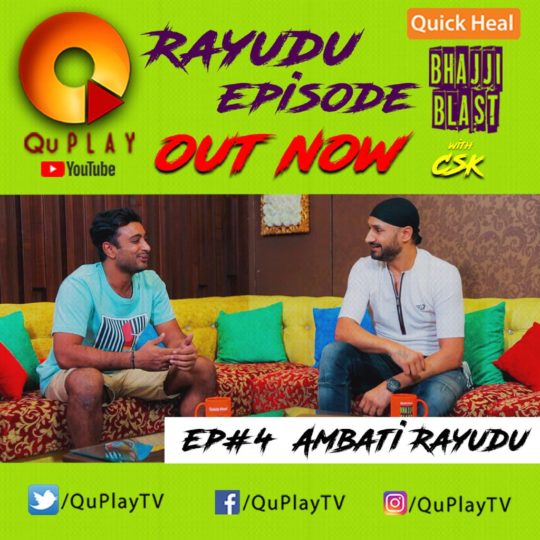 Catch the 4th Episode Streaming on QuPlay  at

Breaking News: Veteran Actor Jagdeep Is No More! Another Set Back For Bollywood!