The young actor who won it for his delightful performance of an eight-year-old, who becomes a travelling companion to an eighty-year-old man, in this 2019 Yoodlee production, says it was an unexpected and happy surprise.

In the list of the recently announced 67th National Awards, child actor Naga Vishal features prominently amongst all the other stalwart winners for the year. He has bagged the National Award for the Best Child Artist for Tamil drama ‘KD Engira Karuppu Durai.’ Directed by Madhumita Sundararaman, this Yoodlee production revolves around the relationship between an 80-year-old man (Mu Ramaswamy) and an 8-year-old boy (Naga Vishal). 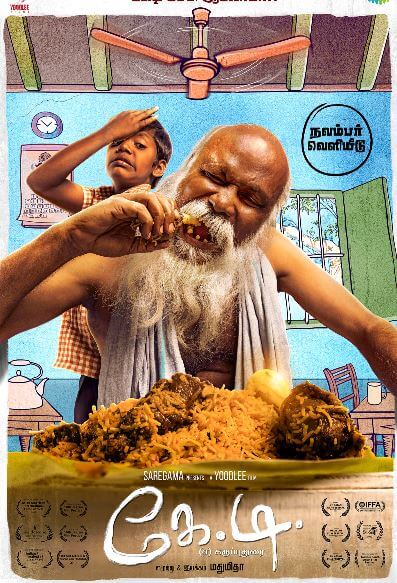 An elated Naga Vishal said,” This is a totally unexpected and overwhelming honour. The filming experience was so easy, and we were all one family on set. Madhumita Maam – my director – was like my elder sister. To get an honour like this at a national level is really something I wasn’t prepared for, and my family and friends are so happy and proud of me today.

Director Madhumita adds, ” To get this kind of recognition, especially from the government, means a lot to all of us. Sometimes I forget that he is a child, especially when he speaks about his responsibility towards the betterment of his family. Nagavishal brought life to Kutty and deserves all these accolades and more. His win is a win for each one of my crew and cast who worked hard for KD to be what it is today. We are all so overwhelmed by the love that the audience has shown our film. Humbled and grateful.”

Siddharth Anand Kumar, VP Films & Events at Saregama India, says, “It’s a happy coincidence that another child star Talha Arshad Reshi also won the National Award for his performance in another one of our productions ‘Hamid last year.’ We tend to pick stories that speak to the heart and underscore the human condition with sensitivity. And a child’s perspective always brings a new dimension to a film. ‘KD’ was one such film and am not surprised that Naga has won this honour because his performance was both evocative and refreshingly simple. Kudos to Madhumita too for directing the film with such empathy.”

This Friendship Day, watch teleplays that celebrate the joys of camaraderie

“Nakkash, wants to pass on the concept of unifying the whole India”-Zaigham Imam!