Skip to content
You are here
Home > Gossips > Why should Munnas have all the fun? Sonakshi Sinha does the hook step from Munna Badnaam Hua, and nails it!

Why should Munnas have all the fun? Sonakshi Sinha does the hook step from Munna Badnaam Hua, and nails it!

Dabangg 3 has been hitting the right notes with the viewers. The songs of the movie too have become a rage.

Leading the pack is Munna Badnaam Hua that has taken over the music charts, and is clearly the song of the year. Chulbul Pandey and Prabhu Deva’s Dabangg dance moves, Warina Hussain’s charm and Badshah’s rap ensured that the song caught on instantly and has taken the excitement around the film to another level.

In addition to this, the belt hook step from the song has also gone viral, and today the leading lady of the movie  Sonakshi Sinha too performed on this hook step and nailed it. 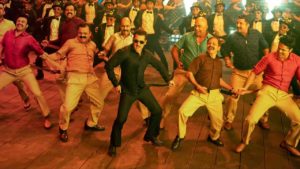 Sonakshi Sinha took to her Instagram and posted the video of herself doing the hook step and we must say Rajjo is as good as the Munna’s herself. She has also nomited Jacqueline Fernandez,  Kartik Aaryan and Aayush Sharma to perform the hook step.

‘Dabangg 3’ is the third film the Dabangg franchise, which stars Salman Khan, Sonakshi Sinha, Arbaaz Khan and Kicha Sudeep in the lead roles. Dabangg 3 will mark the Bollywood debut of Mahesh Manjrekar’s daughter Saiee Manjrekar. The film has been directed by Prabhu Deva and produced by Salma Khan, Arbaaz Khan and Nikhil Dwivedi under the banner of Salman Khan Films and is slated to release on 20th December, this year.

Kangana Ranaut : The Style Icon of  B-Town: Her Trench Coat Look Is To Die For And It Costs A Fortune