Skip to content
You are here
Home > Featured > Watch a mix of season’s most loved songs in Neha Kakkar and Guru Randhawa’s style, only on T-Series MixTape season 2, presented by Amazon Prime Music! 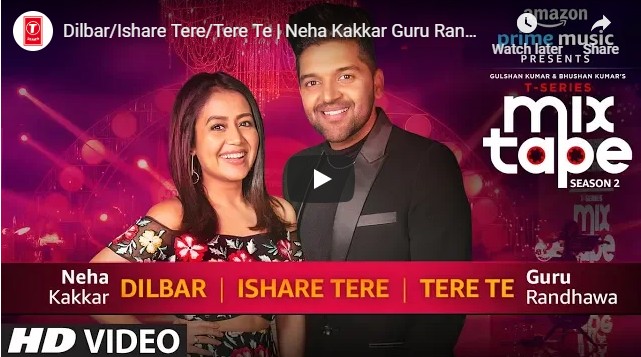 After Shreya Ghoshal and Armaan Malik kick-started T-Series MixTape Season 2 on a magical note, Neha Kakkar and Guru Randhawa will only take the bar a notch higher in the second episode. Expect nothing but the best from Instagram’s most followed singers, as they create a medley of 3 super hit songs, ‘Dilbar’ originally sung by Neha Kakkar for the movie Satyameva Jayate and ‘Ishaare Tere’ and ‘Tere Te’ originally sung by Guru Randhawa.

After their chemistry was highly appreciated in MixTape Punjabi, Neha and Guru are bound to get you grooving this time again. Being a dance mashup, all songs are attractively merged into another as the singers are further joined by a talented bunch of musicians performing on instruments such as drums, bass guitar, electric acoustic keys, percussion and piano, etc. Leaving everyone beaming from one end to another, Guru and Neha are a treat to watch on stage as they effortlessly complement each other. This mix will definitely pull you off your chair.

Talking about his performance and association with MixTape, Guru Randhawa shares, “MixTape allows us to collaborate with an artist and give a new life to your song with use of live instruments. It gives you an opportunity to showcase something new for your fans. This time around, I’ve collaborated with Neha Kakkar on Dilbar, Ishare Tere and Tere Te and it has turned out to be a full on high energy mix. We decided to try something new this time. Hope the audience likes it”

Neha Kakkar further comments “Platforms like MixTape give us an opportunity to present our same songs differently. This time I am performing to one of my most loved songs Dilbar and Ishaare and Tere Te by Guru Randhawa. Our association was immensely loved by people last time around and was the most watched MixTape video. This time I am equally excited and I hope people like it as much as they did last time. This version is groovier and people are going to enjoy dancing to it”

Catch the second episode today in Neha’s and Guru’s voice only on T-Series Youtube Channel, directed by Ahmed Khan and conceptualized and developed by Shivam Chanana and Sonal Chawla. Also, listen to the song on Amazon Prime Music ad free for a voice enabled listening experience.