SonyLIV and Maddock Outsider’s latest web show ‘Chutzpah’ has been creating waves all over the digital world ever since it has started streaming from 23rd July.

Focusing on the world of internet, social media, dating apps and long-distance relationships, not often addressed in cinema or digital world, SonyLIV and Maddock Outsider, with this gem hopes to break the clutter and familiarise audiences with an altogether new subject.

This weekend on the sets of Indian Idol Season 12 will be graced by the cast of the new-age, quirky show starring Varun Sharma, Manjot Singh and Elnaaz Norouzi among other Gen-X actors. They will be seen encouraging the contestants and appreciating their performances while sharing bits about their experience of working on their show.

The trio thoroughly enjoyed the performances by the talented contestants and had a whale of a time interacting with them and wishing them for the grand finale of the reality show. While Varun Sharma mentioned that contestant Pawandeep is his mother’s favourite, Manjot and Elnaaz too praised the other young talented singers boosting their morale. Praising Varun as a fantastic actor, judge Anu Malik congratulated him for ‘Chutzpah’ and told him that the show will definitely be superhit.

Varun Sharma says, “I had been on Indian Idol sets earlier this year and I had a whale of a time watching the young talented singers perform on stage. My mom is a huge fan of Indian Idol and she never misses any episode of the reality show. When I informed her about making an appearance on the show, she was more excited than me and gave her best wishes to all the contestants for the grand finale of the show.”

Aditya Narayan with his effortless laughter riots made the trio burst out of laughter. Going by the pics, it seems the upcoming weekend will surely be a non-stop laughter riot full of entertainment and music for the viewers.

Take a look at their pictures from the sets: 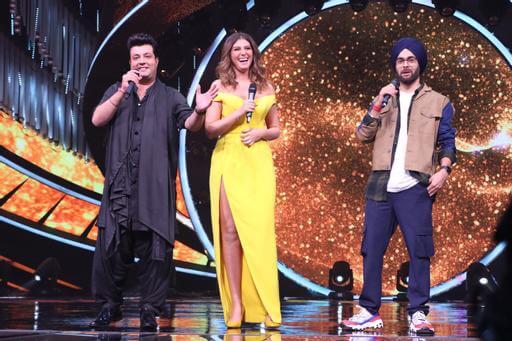 Sidharth Malhotra to star in Bhushan Kumar and Murad Khetani’s next inspired by true events!