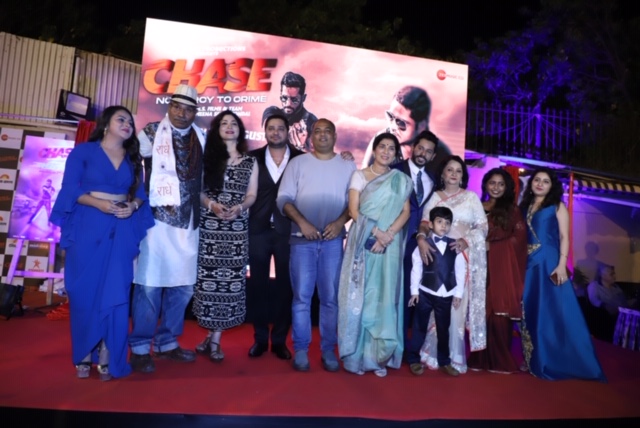 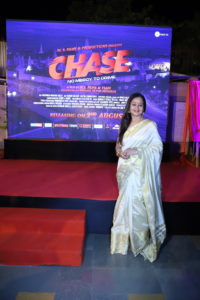 Chase-No mercy to crime is produced by Meena Sethi Mondal and directed by M S films and team. The action-drama film has three songs, sung by Kumar Sanu, Trissha and Buddha. The music is prepared by Bob SN, Rohan D Pathak and Pinaki Bose. Bob SN has given the background score also.Sudhakar Sharma and Rohan D Pathak have given the lyrics. Arabinda Narayan Dolai is the cinematographer and Raj Singh Sindhu is the editor. The choreography is been done by Sandi and Rahul.
Amyth Sethi and  Dipanjjon Basak  is making debut in the Bollywood with this film. Mushtaq Khan, Gulshan Pandey, Gargi Patel, Sudip Mukherjee, Ramesh Goyal and Sameeksha Gaur will be seen in major roles.
The story of the film is based on the true story of heroism shown by the Bengal Police. The film shows the train robbery committed by the dacoit father-son (Shilendra and Satyendra Yadav) based in Jharkhand. A dacoit in which the police and politicians of two states are also cheating on each other. The series of incidents reveals the real identity of the culprit who goes ahead in his intentions crossing other countries – Nepal and Bangkok. Will this master mind come in the hands of Bengal Police? This chase of crime has adventure, action and music. The film is shot on the beautiful locations of Kolkata, Jharkhand, Nepal and Bangkok. The film’s music is released by Zee Music and the film will be released in theaters on August 2, 2019. 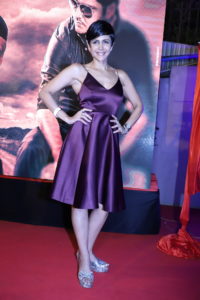 On this occasion, the special guest, Zarina Wahab said that “I liked the movie trailer. Suspense and action is very good, I want to give the film’s producer Meena Sethi Mondal and the whole team good luck for the film’s success.
On this occasion, Meena Sethi Mondal said that “Today’s viewers will get to see the modern age drama in the film Chase-no mercy to crime. The story of the film begins from Bengal and travels to Jharkhand, Nepal and then to Bangkok’s beautiful location. Suspense, with action drama romantic music in the movie will also be admired by everyone. The Movie is all set to hit cinema on 2nd August 2019.