Skip to content
You are here
Home > Featured > “Tiger and I would train together on set”: Aditya Seal speaking on his bonding with his Student of the Year 2 co-stars!

Aditya Seal will be seen playing the role of antagonist in Student of the year 2, and even in the trailer, he is seen kicking Tiger Shroff. However, the equation between the two actors could not be more different behind the camera. Recently, in an interaction, Aditya revealed that he and Tiger used to train together on set. 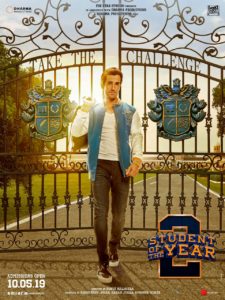 Aditya, kickstarted his career as a teenager with Ek Chhotisi Love Story in 2002, is trained in martial arts and dancing, and is looking forward to showcase the same in SOTY2, “I’m a black belt, Tiger and I would train together on set. I had started learning Taekwondo to use in my films. I stayed in South Korea for months training with the world’s number one team, The Korean Tigers.”

While watching the trailer, one can’t help but wonder if Aditya will also be seen romancing one of the two leading ladies, and the actor shared some interesting details about that, “In the film, Tara interests me but I don’t like Ananya’s attitude. And if anyone steps into my territory, I don’t take it well.”

Recently, some clips from SOTY2 were doing round on social media where the cast is seen shaking a leg with Will Smith on the new version of ‘Radha’ song, and Aditya revealed that he literally had tears in his eyes when he heard that the Hollywood actor was going to be on set. ““I’m a huge fan of the man having watched interviews of his wife and kids speaking about him. He has the perfect family. Someone accidently blurted out that he would be shooting with us and I had tears in my eyes, And he performed like a boss.”

Student of the year 2 has been directed by Punit Malhotra and is scheduled to release on 10th May, 2019.

Digangana Suryavanshi to rule the Tollywood industry being the first leading choice of the producers.

Books have made me an actor – Pankaj Tripathi on screening of Kitaab , Tom Alter’s last musical movie!