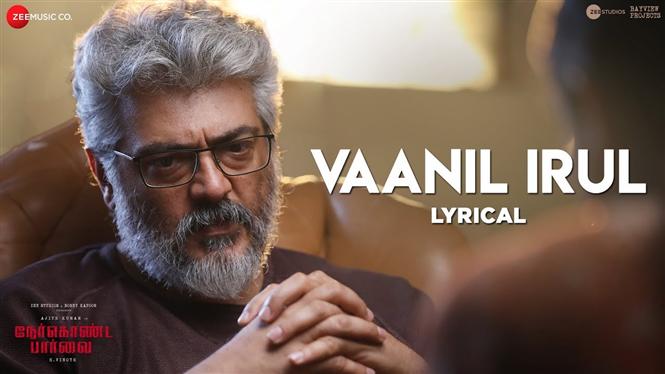 A few days ago, the trailer of producer Boney Kapoor’s maiden Tamil venture Nerkonda Paarvai featuring superstar Ajith received a humongous response from the fans all across and now, the makers have launched the first song Vaanil Irul from the film.

Boney Kapoor took to Twitter and posted the link of the song.

Vaanil Irul is sung by popular playback singer Dhee and composed by talented Yuvan Shankar Raja. The song has a haunting melody that talks about the emotions that the three girls are going through in the film.

Nerkonda Paarvai is a remake of Hindi hit film Pink. Besides playing a lawyer in Nerkonda Paarvai, Ajith who reprises Bachchan’s character will be doing a few kick-ass actions too. With action, songs and an important message, the film will surely appeal to Thala’s fans and Boney seems to have hit the right chord.

Slated to release in August, the film is directed by H. Vinoth and besides Ajith, the film stars Shraddha Srinath Abhirami Iyer and Andrea in the pivotal roles.

102 fans of Amitabh Bachchan from all over the globe (ABEF Team) came together to watch the movie 102 Not Out.