Skip to content
You are here
Home > Featured > The first look poster of the anticipated Shakeela Biopic is here!

Even though she was known primarily for her roles in adult films, her phenomenal success made her several enemies and said to have caused ripples in the male dominated industry of the time.

The first look poster of the film which has the impeccable actress, Richa Chadha playing the titular lead has been released. Covered in authentic gold jewellery, which is a staple element of glamour in Kerala, Richa looks every bit convincing as Shakeela Khan.

Interestingly the actress stands defiant in the face of the insults that are scribbled on the wall behind her.

The film which has been produced by Magic Cinemas and Yoddhas Entertainment is now all set to release in Summer 2019. 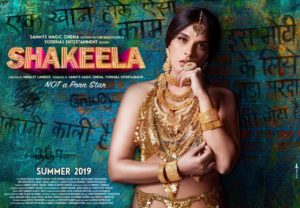