Skip to content
You are here
Home > Featured > *Strangers or Trouble bearers : The cost involved in helping a stranger*

*Strangers or Trouble bearers : The cost involved in helping a stranger*

Inspired by real events, Bombairiya springs from the chaos of Mumbai. In the daily crush, half the city will be having a bad day, while the other half may be too caught up in their own samasya to stop and help. Passers-by may even think: ‘I may be blamed or hurt if I get involved.’

When someone does help, they are always the exception, acting on instinct without thinking. The writers of Bombairiya admired that about the boy who inspired the character of Abhishek, allowing the film industry girl to borrow his phone and call the thief. These real events lent an ‘air of magic’ to their film. Somewhere in the city, there is a real Abhishek, his real ‘Jiju’, and a ‘Biker’ who became part of the girl’s bad day, making it much worse. But there are few things more beautiful than someone putting themselves in a vulnerable situation for a stranger. Such people may even seem like idiots.. 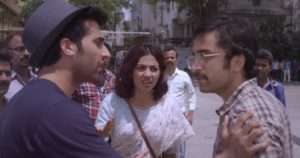 Too much trust and people can get conned or hurt or even risk their lives. Too little and harm will be done. It’s a dilemma that haunts every human being who passes someone in distress and it goes to the core of the film.