Skip to content
You are here
Home > Featured > Seerat Kapoor welcomes monsoon, shares what she likes to do while it’s pouring outside

The gorgeous Seerat Kapoor has welcomed monsoon and shared what she likes to do the most when the weather is pleasant and cozy. The actress is known for her versatile acting for which she gets a lot of appreciation and love from her fans. Seerat Kapoor sparked her Tollywood career with the film “Run Raja Run” which was followed by a number of films like “Columbus”, “Okka Kshanam”, “Maa Vintha Gaadha Vinuma”, and “Touch Chesi Chudu”. 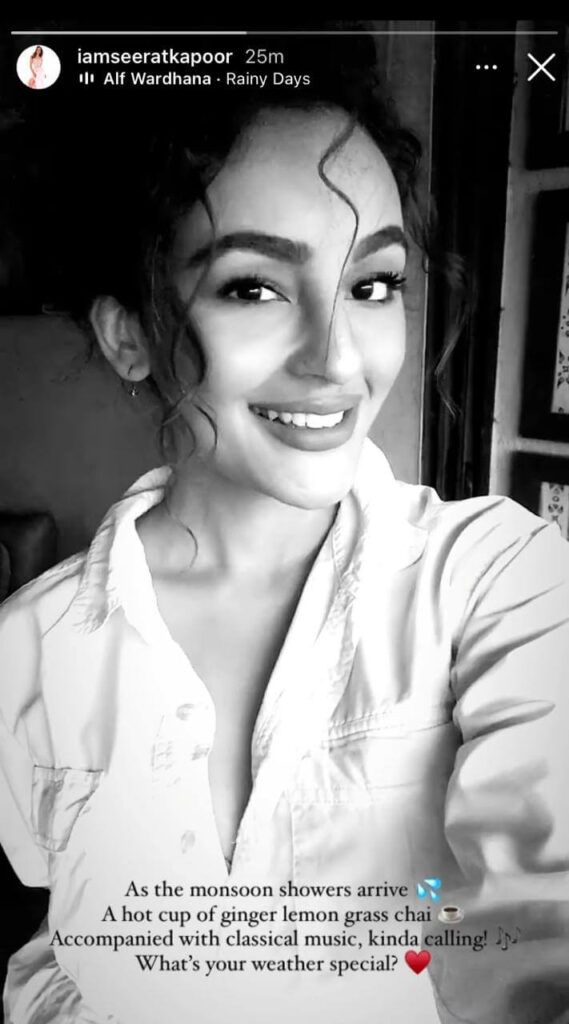 After hot and humid months of summer are over, it’s finally time for Mumbaikers to welcome and enjoy the monsoon. While many people have a favourite pass time and must-do when it’s raining, actress Seerat Kapoor shares what she would like to do the most. The actress is a trained classical singer and seems to enjoy classical music and, just like everyone who wants to enjoy a hot beverage on a wet day Seerat Kapoor would love to sip on a hot cup of ginger lemongrass chai in the cozy weather, she tweeted saying “As the monsoon showers arrive 💦 A hot cup of ginger lemongrass chai Accompanied with classical music, kinda calling!☕ What’s your weather special? ❤️ ”. Seerat Kapoor is a complete mood and her leisure time is certainly a great idea, she even added to her tweet by asking her fans what would they prefer to do.

On the work front, Seerat Kapoor is soon going to be making her Bollywood debut in the film “Maarrich” with the veteran actor Naseeruddin Shah and Tusshar Kapoor. The film is said to be a production of Tusshar Entertainment House.

Being from a defence background, my parents supported me in becoming an actress, says Veronica Vanij

Gaalib all set to hit theatre on 11th December 2020