Artists are remembered not only for the quality and unique style of their art but also for their own individual character and influences by culture. Art can have many forms depending on how it is defined and who defines it. It allows people of different cultures and different times to communicate with each other via their creativity. Art has the power to transcend geographical boundaries, political differences and restrictions of time. It knew no linguistic barriers, no racial differences, it is a great unifying and integrating force. This is the spirit depicted in these rare paintings of Srimanta Sharkaradeva done by Artist Vladimir Trochin from Moscow. His main aim was not to represent the outward appearance of things but their inward significance. 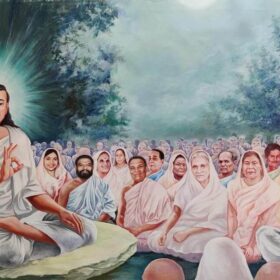 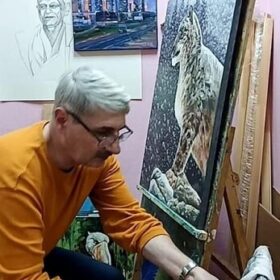 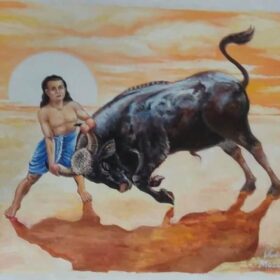 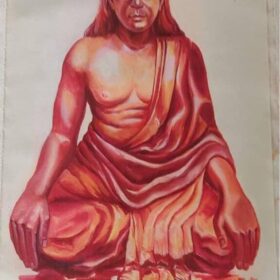 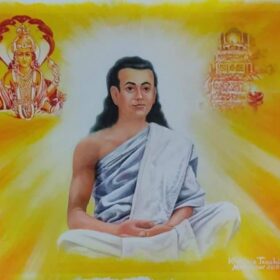 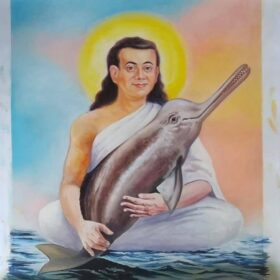 Vladimir Trochin is a Russian citizen, age 54, from Moscow. He is a renowned sculptor, Illustrator and theatrical artist. He completed his education at Odessa Theatre & Art School with a 5 years’ degree. Vladimir’s pictures and sculptures are a part of private collections in Russia, Ukraine, Moldova, Estonia, Poland, Germany, Austria and Uzbekistan. His interest grew in Assam and its culture as his younger brother Victor Trochin has been residing in Guwahati, Assam for more than 20 years and married to an Assamese – Mitali Goswami Trochin and is blessed with a family of three children. Ms Mitali Goswami comes from a Sattriya background as her father Late Sattradhikar Bhadra Krishna Goswami was a socio-cultural envoy of Assam known for his distinguished pursuit of Sattriya Art Culture and Assamese literature. His relentless handwork towards uplifting and preservation of Sattras of Assam is lauded with praise, gratitude and respect across the globe. Vladimir was very much inspired by his works and took a deep interest in the study. He went that extra mile to ardently explore the religious and spiritual dimensions of Shankar Devas Vaishnava believes. Vladimir’s interest took an art form and he believes that is this one of the best ways to express and pass on the knowledge to the younger generation in the hope to ignite the true ethos of religious and cultural believes of Neo Vaishnavism.

The Artist has portrayed Shree Shankar Deva in different forms – his childhood (Bullfights” to Catching Brahmaputra river Dolphin), as a spiritual guru an epitome of Vaishnavism and Sattriya culture and with his disciples in laying the foundation of Assamese Sattras. In one of the paintings, he even wrote in the Assamese language. Thus his profound ability to comprehend allowed him to gain an insight into the Vaishnavism tradition.

In addition to cultural depictions, the artist has an affirmation and plea for Conservation. Among his numerous works, a striking red African elephant at an exhibition in Moscow stood as a symbol for Wildlife conservation. The painting portrays the animal emerging from fire signifying the strength and courage to move out of its endangered status. The spectacular exhibit was complemented by a message written by Elephant Scientist Mr Surendra Varma, and Aksha Chowdhary, a researcher from Asian Nature Conservation Foundation(ANCF) Bangalore, India which helped in amplifying the voice of Elephants even in Russia, where elephants are not found.

Nikita Dutta gets her nail extensions, and she has a newfound respect for every girl out there, check out to know further