If there is one word to describe Ranveer Singh’s persona and style, it is QUIRKY. Ranging from the choice of roles he played to the humour he exhibited during AIB, his approach towards everything has been anything but conventional. Right before he earned name and fame for displaying spectacular acting skills, Ranveer caught everybody’s eye for his uncanny fashion sense.

Fashion Blogger Nischita Babu strongly believes that Ranveer’s style – which although gave nightmares to fashion police- wrote the initial pages of his ‘book of stardom’.

“Ranveer wore a skirt with pleats to the launch of Malhari song from ‘Bajirao Mastani’ and made everyone swoon. Another day, he wore a statement t-shirt with a silk nightgown, muppets pyjamas, and Sylvester fluffy slippers to The GQ Best Dressed Men Awards 2015. No matter how well other actors dress up, Ranveer knows how to steal the show.” 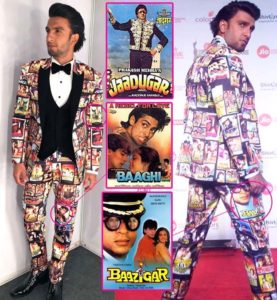 From rocking the mad hatter look to confidently walking in rainbow coloured pants, Bajirao Mastani actor has no competition in making headlines for whatever reasons. But is it actually his ‘I-don’t-care-what-people-say’ attitude or a well-planned step for branding and image management?

Nischita thinks he understands how the industry works and how important it is to be in news. “Ranveer very well knows this is the era of social media and to keep trending on it, you need to be exceptional. He is using his bold attitude and confident personality to stand apart from rest of the actors. Moreover, nobody else in the industry has the guts to beat him in the fashion game,” she added.

“Having said that, there are no second thoughts about Ranveer’s acting talent. Undoubtedly, he is one of the best actors Bollywood has right now. He doesn’t really need other tricks and tactics to keep up his fan following, but his out-of-the-box styling ideas are adding to his popularity…which isn’t harmful either,” she concluded.

Sherlyn Chopra is a true inspiration to all the young women, here’s why