Raj and DK wins the Best Series for The Family Man at the Critics Choice shorts & series awards.  Manoj Bajpayee won the Best Actor for the show and the show also won the Best Editing award for Sumeet Kotian.

The Family Man has become the top most show in the country! According to Ormax, it’s the most liked show of the year. It’s also the most watched Amazon Original in India, and has received an overwhelming positive response from audience and critics in India and from around the world.

The critics have praised the series as ‘masterful, exhilarating, authentic, uncompromising, very relevant, and highly entertaining!’ And have hailed Raj & DK as two of the bravest directors in the country.

Raj  and DK are creators of unique, original films and series. They are pioneers in mixing genres, and have introduced a fresh brand of humour into Indian cinema. 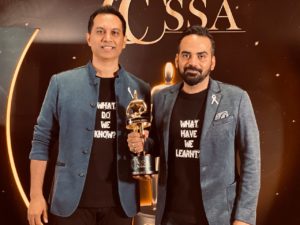 Last year, the duo won best film for Stree and this year its The Family Man.
*”On winning the best series award, Raj and DK said, “It feels great to get the award for Best Series… This is very special and given that this is the first year for these awards makes it even more special. The fact that it is coming from a very credible body like the Film Critics Guild adds great value to the whole thing. Congratulations to the entire team of The Family Man, it’s not easy to pull off a ten episode season, and the whole team has done a stellar job… especially our  co-writer Suman Kumar. Congratulations to Manoj Bajpayee for winning the Best Actor, he was the heart of the show. Congratulations to our editor Sumeet Kotian for an excellent job. This journey would not have been possible without the tremendous support of the entire cast and crew!*

Priyanka Chopra is in love with the beauty of Assam. The Quantico actress flew down to Jorhat and shot across two days in Luxurious Assam.

Sherlyn Chopra’s OTT “REDSHER” is setting new standards of style & glamour! And the viewers are begging for more!’