Skip to content
You are here
Home > Featured > People who keep their wives as trophies and keep young girls as their mistresses should be boycotted: Kangana Ranaut

People who keep their wives as trophies and keep young girls as their mistresses should be boycotted: Kangana Ranaut

Bollywood actress Kangana Ranaut is known to speak her mind out on causes that are close to her heart. Recently when a woman accused Queen Director Vikas Bahl of sexual harassment, Kangana not only extended her support to a former employee of Phantom Films but also revealed that the director had harassed her on the sets of Queen as well.

In light of recent developments, there are talks that Vikas Bahl license might be revoked. When a leading news channel asked Kangana about the latest development, she said, “Whatever is happening with Vikas Bahl is absolutely correct. There are many people like Vikas Bahl he is not the only one. We still have a lot of work to do it so we should not start the celebrations as yet.  We have a long way to go. We have to make this place absolutely safe for woman. There are men who make false promises of love and marriage to a girl to get them in to a relationship that is also a type of harassment. There are married men keep their wives as trophies and keep young girls as their mistresses like Hrithik. Nobody should work with such people. They should be boycotted”. 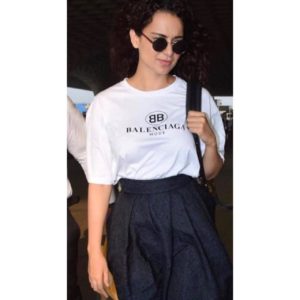 Kangana was speaking while she was leaving for the next shooting schedule for her movie Manikarnika: The Queen of Jhansia. The movie is an ode to Rani Lakshmibai and will be releasing on January 25.

Joint  statement by Mehr and Arjun Rampal on separation

Atharva Foundation organised “A Tribute and salute to Soldiers & Mumbai Police who saved Mumbai from the 26/11 Terror Attack.