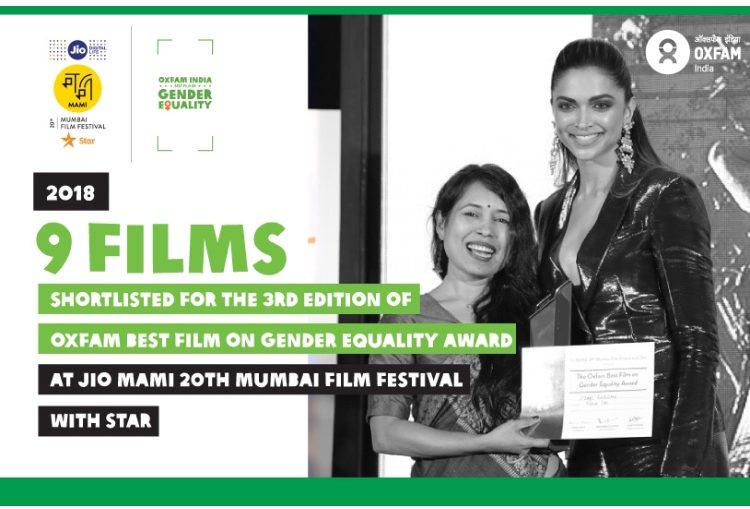 Nine films shortlisted for the third edition of Oxfam Best Film on Gender Equality Award 2018 at Jio MAMI 20th Mumbai Film Festival with Star
Nine films have been shortlisted for this year’s Oxfam Best Film on Gender Equality Award 2018 at Jio MAMI 20th Mumbai Film Festival with Star.
The films in the reckoning for this year’s Oxfam Best Film on Gender Equality Award are powerful dramas, in various Indian languages, that make compelling social commentary on the times we live in.
This year, Oxfam India is challenging filmmakers, producers and artists to create cinema that breaks the stereotypical portrayal of male and female characters in films. The theme for this year’s award is “Cinema Beyond Stereotypes”.
In 2017, Rima Das’ Assamese film ‘Village Rockstars’ won the Oxfam Best Film on Gender Equality Award at MAMI and later bagged the National Award and is now India’s official entry to the Oscars.
Director Rima Das will be one of the jury members for this year’s award along with National Award winning actor Parvathy and CEO of the Doha Film Institute Fatima Al Remaihi.
From Marathi film ‘Imago’ that tells the story of a shy, teenage girl battling leucoderma and the social stigma around it; to ‘Hamid’ that explores the two sides of the Kashmir conflict through the eyes of an 8-year-old boy; to Kannada film ‘Balekempa’ that revolves around a couple unable to conceive a child; and Bengali film ‘Jonaki’ that explores an 80-year-old woman’s search for love are on the list.
Making the decision even tougher for the jury are five other strong films ‘Soni’ a Hindi film directed by Ivan Ayr; ‘Jaoon Kahan Bata Ae Dil’ directed by Aadish Keluskar; ‘Light In The Room’ (‘Ottamuri Velicham’) directed by Rahul Riji Nair; Kannada film ‘Nathicharami’ directed by Mansore and ‘Sivaranjani And Two Other Women’, a Tamil film directed by Vasanth S Sai.
Amitabh Behar, CEO of Oxfam India said:
“We are thrilled that this year the number of shortlisted films have increased from four films last year to nine. This is a reflection of the changing times in cinema industry worldwide. Stories that uphold a mirror to socio-political realities in India and that defy stereotypes of caste, class and gender are being made, accepted and appreciated. Women in films are making space to be heard both on and off-screen. The award is to appreciate, celebrate and support stories and people in the industry challenging the status quo. The shortlisted films are in different Indian languages— Kannada, Marathi, Hindi, Malayalam, Tamil, Bengali and each film has an arresting narrative. It gives us great joy that last year’s winner ‘Village Rockstars’ is this year India’s entry for the Oscars.”
The winner of the Oxfam Best Film on Gender Equality Award 2018 at MAMI for this year will be announced on
November 1st, 2018 – on the closing night of the festival. 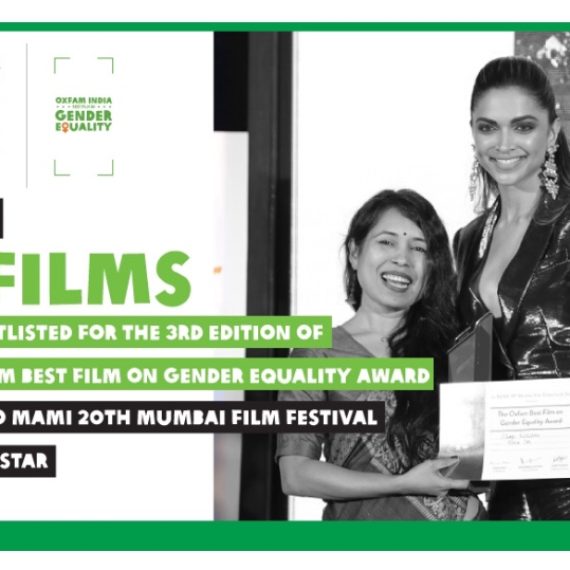 E61E9715-4540-4C2A-8C74-8463ED9F9C69
Here are the films with  synopsis below
1) Name of the film: Imago
Directed by: Karan Chavan and Vikram Patil
Language: Marathi
Synopsis: The film tells the story of Namrata, a shy and introvert teenage girl living in a small village who suffers from leucoderma or vitiligo, a skin abnormality. Weird, sympathetic, penetrating ‘normal’ eyesight has made her feel guilty and embarrassed for who she is and how she looks until a young and vibrant teacher joins her school.
2) Name of the Film: Hamid
Directed by: Ajiaz Khan
Language: Hindi
Synopsis: ‘Hamid’ tells the story of eight-year-old Hamid who learns that 786 is God’s number and decides to try and reach out to God, by dialling this number. He wants to talk to his father, who his mother tells has gone to Allah. One day the phone call is answered, and two lives shattered in the strife of Kashmir find a way to be complete again.
3) Name of the Film: Balekempa
Directed by: Ere Gowda
Language: Kannada
Synopsis: ‘Balekempa’ revolves around a village bangle seller and his wife who cannot conceive a child. In this close-knit patriarchal community in Karnataka, hidden desires and relationships find a way to exist, raising a question on whether the husband’s secret will ever come out.
4) Name of the Film: Soni
Directed by: Ivan Ayr
Language: Hindi
Synopsis: The film revolves around the alliance between Soni, a young Delhi policewoman, and her superintendent is tested to its limits when they suffer a major setback in their fight to curb the most serious social crisis of a generation.
5) Name of the Film:  Jaaon Kahan Bata Ae Dil
Directed by: Aadish Keluskar
Language: Hindi
Synopsis: The movie focuses on the decaying foundations of a relationship and the motifs which once cherished have now turned into moments of degradation. The film brings romance in an encounter with
reality.
6) Name of the Film: Light In The Room ( Ottamuri Velicham)
Directed by:  Rahul Riji Nair
Language: Malayalam
Synopsis: ‘Light In The Room’ (‘Ottamuri Velicham’) is the story of Sudha’s fight and survival inside a single room house against her husband who engages in acts to physically exert his dominance over her.
7) Name of the Film: Nathicharami
Directed by: Mansore
Language: Kannada
Synopsis: ‘Nathicharami’ highlights the taboos our society has related to the subject of sex and carnival desire. This film is woven around the female protagonist whose personal life and hence her overall being is stuck within such a framework.
8) Name of the Film: Sivaranjani And Two Other Women
Directed by: Vasanth S Sai
Language: Tamil
Synopsis: ‘Sivaranjani And Two Other Women’ is a sensitive capturing of the micro-awakenings of identity, space and self-worth when family dynamics, early marriage and pregnancy threaten to usurp the individuality of three different women. The story happens across three different time-periods. The film is a tribute to their inner strength and courage against casual sexism and patriarchy.
9) Name of the Film: Jonaki
Directed by: Aditya Vikram Sengupta
Language: Bengali
Synopsis: The film revolves around Jonaki, an 80-year-old woman, searching for love in a strange world of decaying memories, has her lover, now old and grey, returning to a world she is leaving behind.

I admire Kangana as she speaks her mind : Celebrity life coach Chaya Momaya !

The Coolest Anti-Party Party Anthem is here!! Jackky Bhagnani & Yo Yo Honey Singh Mix a crazy Mocktail for Mitron with ‘This Party is over now’